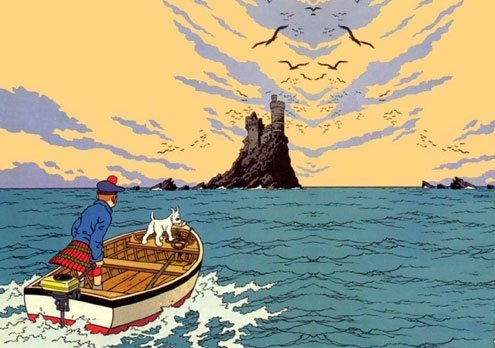 Weaned on Tintin, I mostly gurgled and sighed.
W

hen I first arrived in the United States I was a concave five-year-old who spoke no English. The limited vocabulary I had I’d learned from my American father and my French-speaking Polish mother. One spoke to me in English, which sounded like rubble, the other in French, which I recognized from comics. Together they conversed in Italian. Weaned on Tintin, I mostly gurgled and sighed.

Arriving in grand America, with its small lawns and talkative people, I was immediately assaulted by incomprehensible noise. I was soon dispatched to a bilingual private school that specialized in curing young student of French and generally terrorizing their daily lives with harsh lessons and glaring teachers. That first year — we lived in a place called Georgetown — I remember for its constant menace.

I understood very little and what I did penetrate suggested imminent peril.

Caught in a pharmacy (no, the “drug store”) on a thundering day, the manager told my father (and me, his small goat) that it was “raining cats and dogs.” Though trained in discretion (no sudden panic), I refused my place under the umbrella fearing sidewalks littered with heaps of small dead animals. Who or what hurled cats and dogs from the heavens? And why in America?

Another time, at the market (no, the “supermarket,” since suddenly all had become quintessentially super), my mother asked directions to a clothing store and was told it was more or less far away “as the crow flies.” When I asked my mother about the crow’s role, she looked bewildered, so I spent several days scanning the skies for tape-measure birds trained to calculate distance. I also sought clues from neighborhood crows – until someone told someone else they had to “eat crow,” a new and awful prospect, so I backed off.

Then came a new set of holidays, which governed my attendance at the menacing school, where no cats, crows or dogs dared to tread (only Mrs. Macadam, who said she came from Ireland but looked like female version of the a Tintin villain named “Rastapopoulos.”)

The first holiday was Washington’s Birthday, which I understood to some extent, since we lived in Washington. What I couldn’t understand was how a city could have a birthday, and if it did have a birthday, didn’t it also need a mother and a father and perhaps a pet. I announced this wisdom to my mother, who had replied in French. Her answer was simply that I didn’t need to go to school that day, which appeased my curiosity.

Then came Memorial Day and Independence Day, two very peculiar holidays (at least saint days had names) apparently connected to remembering and running away. My neighbor Byrne explained Memorial Day as “the time when people think a lot about all the dead people before.” Why it took a full day to do this, and why anyone should bother, eluded me.

Independence Day Byrne linked to the British, which confused me further since I already had French, Italian and Poles to deal with, and didn’t want further national additions. He said the day had to do with “breaking away,” but I understood only “break” and wondered if all had been since repaired. I still do.

Most confusing of all was Labor Day. This one I understood, or thought I did. On this day, people would labor, no doubt diligently. I looked forward to my day of labor, assuming in might cure my general sense of boredom.

But on my first Labor Day nothing happened. I did stay home, since Mrs. Macadam was closed, but no one did a thing. On the most industrious day of the year my father read a newspaper, my mother ironed clothes and no crows showed up.

I decided to get more form Byrne, the supplier of precious explanations. “Labor Day,” he told me, “is when people rest because they worked all years so they take time out for that…” When I finally pieced together this astuteness I began wondering why it wasn’t called Rest Day or Nothing Day, even Stop Day. Why was there no labor on Labor Day?

With no clarification forthcoming, I asked my father, who called it a “linguistic paradox,” which I didn’t understand and emerged from his mouth sounding midway between a chew and a hiss.

By the time I got to Veteran’s Day we had moved to Madrid, where they spoke Spanish and swore by saints. This was a great relief, since Mrs. Macadam had promised a vivid explanation of Thanksgiving, which I dreaded. I gave thanks for my escape and reveled instead in Franco’s Spain, where every second day was a Stop Day and the crows seemed friendlier.