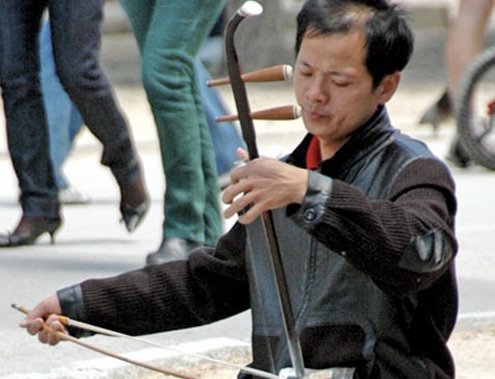 I waited for him to stop playing but, if anything, he played with more intensity.
W

hile hurrying to catch a train in the Duomo subway station, I was brought to a halt by strange, marvelous music, coming from a nearly abandoned side corridor. Someone was sitting on the pavement playing an exotic stringed instrument. From a distance, the slight build, erect posture, and black pony tail led me to think the musician must be a young girl.

I changed my route to hear better. It was a simple pentatonic melody, loud, haunting and played with technical mastery. As a musician myself, I recognized a tone quality that can only be achieved by a lifetime of practice. When I drew near, I realized the musician was an Asian man, probably in his thirties, maybe older. He played an intricately carved wood instrument, consisting of a small box, resting on the floor, and a long neck ending in a dragon. Two large pegs pierced the dragon and held a single string, which was anchored to the box.

He used a large, thickly strung bow. As it picked up speed, the long notes crescendoed to a mournful wail. The left hand walked up and down the string, drawing out each sound with expert vibrato.

I listened for some time, transfixed.

I waited for him to stop playing but, if anything, he played with more intensity. Finally I coughed discreetly. Street musicians are usually pleased to speak with interested listeners but he gave no sign of having noticed me. The music reverberated against plastic coated, mustard-colored walls and filled the long, subway tunnel with human anguish.

He wore trendy glasses, an expensive looking watch and shoes. His black slacks and shirt were clean and recently pressed. In contrast, his instrument case lay open to receive spare change. I dropped in a coin, wincing at the rude clatter.

He seemed in a trance. Finally I said, “Scusi,” and he reluctantly stopped playing. He squinted and avoided looking at my face.

I asked what instrument he was playing. Before answering, he put his hands together and quickly bowed his head. He said something that sounded like “Houf Wuf.” I handed him a pencil and paper and he wrote it down.

I asked where the instrument was from. He bowed again and said, “Chee-nay-see,” in a voice so raspy it seemed fake. Since his technique was similar to a cellist’s and he was clearly a classical musician, I asked if he also played the cello. He gave another bow and a drawn out “Si,” that might have been sarcastic. He could have been an actor, in some period film, this whole thing a presa in giro.

When I told him his playing was beautiful, he went still, as if turned to stone.

I should have quit bothering him then but, after a minute, I asked if he played in an orchestra. This time, he bowed and answered, “Pur Sapienze.” He picked up his bow, poised it to resume playing, and waited for me to leave.

A few days later, a friend who knows Chinese and has lived in China understood whom I described because she’d heard him play. She believed him to be a Chinese Master musician. She said the head bowing was part of the discipline. She read me what he’d written on the paper: “October 2.”

A sea of extracommunitari, many illegal, ekes out a living in Milan’s streets. It’s as murky and mysterious as the Seveso that stews and festers beneath the street where I live. Yet it contains this jewel: music ardent and refined, played by a musician better than I could ever have hoped to become.

After my encounter with the musician, I reluctantly resumed walking to the train platform. The music stopped. A few minutes later, he appeared on the same platform, his instrument case on his back. He was no taller than my shoulder.

I stepped into the same car he did, keeping a distance.

Since I’d ridden past my stop, I started walking home. The piazza was bustling with automobiles and pedestrians, mostly immigrants, crowding the sidewalks, hurrying to catch buses. The sprawling looping tubes and tanks of a sewage processing plant blended with graffiti-scribbled buildings. Upon a warehouse roof, a crow the size of a chicken picked at a dead bird. The Grigna mountain rose far away in the northeast.

I looked for the musician but he had disappeared into the city throng.