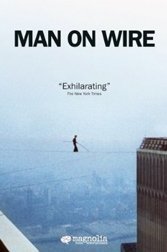 James Marsh’s documentary account of Frenchman Philippe Petit’s August 1974 tightrope walk between the Twin Towers is touching, funny and literally mind-boggling. Based on Petit’s own beautifully-crafted memoir “To Reach the Clouds,” the refreshingly uncluttered 90-minute film mostly lets the charming, idiosyncratic French performance artist tell himself in his own “Petit Guignol” words, with his tight circle of former mates chipping in as a still-in-disbelief supporting cast. Lighthearted recreations also help.

In his early 20s, street performer Petit happened on a magazine announcing the ongoing construction of the New York skyscrapers and became obsessed with stringing a wire between them. While they were going up, he whetted his high wire appetite by walking between the towers of Notre Dame and the Sydney Harbour Bridge, each time producing gasps, official confusion, and brief arrests.

But the Manhattan adventure was on a scale that only dreamers and romantics would contemplate putting into practice. Briton Marsh understands the beautiful folly, focusing on Petit’s wry, physically vivid narration of how it all awkwardly fell into place. “If I die, what a beautiful death!”

In many ways it’s a simple story about dream-fulfillment, only that few dreams possess such otherworldly ambition, with its 1,350-foot high landscape. Since no live footage was shot at the time, Marsh stitches together the tale through interviews, preparation shots, and stills of the main event. It is to Marsh’s immense credit, and Petit’s, that the ultimate fate of the towers isn’t broached here. Instead, Petit’s reverence for the majesty of the buildings gives them renewed richness and a lease on eternal life.