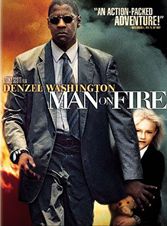 Director Tony Scott is a sucker for fables of redemption. Here, CIA assassin-turned-alcoholic Denzell Washington (Creasy) gets a second chance as a bodyguard in Mexico charged with protecting Pita (Dakota Fanning), the daughter of a prominent businessman married to an American. He reads the Bible. She’s cute and headstrong. Suddenly, she’s kidnapped. Until then, the movie works adroitly with character — Washington and Fanning are a playful “couple.” The last hour — Creasy forages for Pita and his lost honor — is an orgy of vindictive brutality that aches for authentic morality but revels instead in waves of processed violence. Character is abandoned in favor of automatic wepons and heavy-handed doses of sentimentaity. A pity. Nice turn by Christopher Walken as Creasy’s one-time handler.