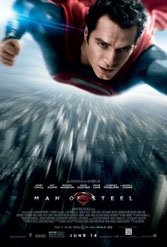 This is the golden age of comic book films. Marvel’s piece-by-piece “Avengers” project has redefined the summer blockbuster, and DC is now getting similar treatment. If you count Christopher Nolan’s “Batman” trilogy as a separate entity, this Superman revamp is the first step in a Justice League reunion. It’ll be a slow build-up but this dazzling fist-pumper wets your whistle.

“Man of Steel” is an origin story. It opens with Superman’s (Henry Cavill) birth on Krypton and his crash landing in Kansas and covers his struggle to come to terms with his mighty powers. The future of the waning Kryptonites literally runs through his veins, pushing cruel overlord General Zod (Michael Shannon) to track him down and revive the race.

The Superman franchise’s biggest hurdle has always been humanizing the inhuman, and Henry Cavill does a fine job (the last pretender was Christopher Reeve in the 1970s). Behind his polished veneer is rich spectrum of emotions. He must deal with inter-species father-son bonds, human society at large, and deeper battles with his inner demons. Cavill’s has lean and chiseled looks, but he’s anything but plastic. A heart exists and ticks.

The supporting cast supports him ably, Shannon’s reptilian-faced Zod especially. Shannon, a fine character actor, has shot to fame in recent years and the comic book sphere appears to be his perfect habitat. Less convincing is Amy Adams as damsel Lois Lane. Adams, a bright-eyed beacon of talent, is naggingly plain. The 120-minute runtime also muddles with the pacing.

That said, oh-so campy Superman is back. He soars in this spectacular drip-drop drama that’s filled with intoxicating action, fetching theatrics, and kick-ass costumes. Roll on the sequel.