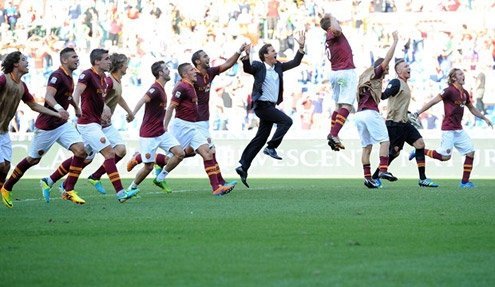 You don't play a derby, you win a derby, said AS Roma's French manager Rudi Garcia after his team took on Lazio, and won. Roma has won its first six season matches.
A

fter less than three months in charge of AS Roma, Frenchman Rudi Garcia has already made history. The traditionally slow-starting team has won its first seven Serie A games, the 86-year-old team’s longest such streak and one of the finer opening runs in recent Italian football history.

As part of the remarkable run, Garcia’s men exorcised their derby demons with a 2-0 mid-September victory over urban rivals Lazio, a fixture the blue half of the city has dominated in recent seasons, culminating in Lazio’s Derby della Storia triumph in the final of last season’s Coppa Italia.

Since José Mourinho-coached Inter Milan narrowly edged out Roma for 2010 Scudetto, the team has performed erratically. While there have been odd rays of light — victory over Bayern Munich in the 2010-11 Champions League group stages, a 4-0 demolition of Claudio Ranieri’s Inter in February 2012, and Francesco Totti’s winning goal against Juventus last season — Roma was consistently unable to deliver strong results, placing seventh in 2011-2012 and sixth last year.

That history makes any discussion of Roma as serious challengers for the 2014 title premature, which manager Garcia appears to understand. He has called on his team to remain level headed and humble, a sentiment echoed by Totti, its veteran captain. Even the volatile fan base, though enthralled, appears to know that the season is young, greeting the early success with a pinch of salt.

The greatest value of years of underachievement may be to lower expectations and, easing what can be suffocating pressure on players and coaches, particularly on a high-profile club. The strong start has restored fan pride and provided an unexpected turn of events in the weeks after the team surrendered two star players, Pablo Daniel Osvaldo and Erik Lamela.

Together, the Argentine-born duo found the net 32 times last season. Their August exits not only begged the question of how to replace their scoring output, but also raised suspicions about the club’s investment in Garcia (allegedly their third choice manager after Manuel Pellegrini, who heads Manchester City, and Laurent Blanc, the new PSG coach). Osvaldo and Lamela were clearly tailor-made for Garcia’s preferred 4-3-3 system, the same one that saw the team thrive last season, albeit briefly, under Zdenek Zeman and Aurelio Andreazzoli.

Garcia was best known for his successful five-year stint at French club Lille, which he led to a league and cup double in 2011. The side’s attractive playing style saw it nicknamed “mini Barcelona.” Les Dogues adopted a fluid 4-3-3 open to change as game circumstances required. The system’s most prominent feature was the fielding of two wingers (current Chelsea star Eden Hazard and Gervinho) on either side of a central striker (Moussa Sow), and use of modern-day, marauding full-backs (Franck Beria and Mathieu Debuchy) in support of the attack.

Garcia has installed a similar system in Rome. Totti continues to make the central attacking area his own, but with the guile and good sense to often play the role from a deeper position, leaving defenders guessing how to mark him most effectively. In that sense he’s taken Hazard’s occasional Lille role as a so-called “false number nine.” Remarkably, Totti has already provided four assists in the first five matches.

So far, Garcia has given fairly even playing time to Alessandro Florenzi, Gervinho and Adem Ljajic, deployed as wingers in support of Totti, Roma’s 37-year-old talisman. After two barren years at Arsenal, Gervinho has rejoined forces with his Lille manager and looks to have regained a game-day appetite that sometimes looked questionable in North London. The Ivorian’s undoubted pace has seen him make effective runs down Totti’s flank (he has scored three times so far), while Serbian Ljajic — a summer signing from Fiorentina — has also taken little time to find his feet.

Garcia’s combinations have worked well, with all four players scoring (Ljajic and Florenzi already have three apiece). The deployment of two holding midfielders, Daniele De Rossi and Kevin Strootman, has given full-backs Maicon and Federico Balzaretti the opportunity to bomb forward and exploit the gaps opened up by the opposition defenders chasing Roma’s nippy wingers.

They, too, have registered goals, with Balzaretti netting for only the seventh time in his lengthy career in the win over Lazio. All three central midfielders, De Rossi, Strootman and Miralem Pjanic, as well as central defender, Medhi Benatia, are also on the score sheet.

If the club continues in this rich vein of scoring form, memories of Osvaldo and Lamela will likely vanish, as will regrets about departed Brazilian Marquinhos, particularly if defenders Leandro Castan, Mehdi Benatia, and experienced goalkeeper Morgan De Sanctis continue to help the side to clean sheets. They have four so far.

Most reassuring for Roma fans is to see players working hard for each other, their manager, and their supporters, a missing ingredient in recent years. Last season was tarnished by Osvaldo’s poor discipline or Lamela’s selfishness on the ball.

Leading 1-0, a lapse in concentration almost cost Roma dearly against 10-man Lazio, as Ederson charged clean through on goal. But veteran De Rossi, who many felt had fallen out of love with his boyhood club, rushed back to make a perfectly-timed last-ditch tackle to win the ball. His grit was emblematic of the kind of play Roma supporters have seen so far.

Garcia’s French critics, while praising the manager’s intensity, warned that his style, once understood by opponents, was vulnerable. That remains to be seen, but so far he has given Roma’s rabid fans a release from the woes of their recent past.