Man is wolf to man 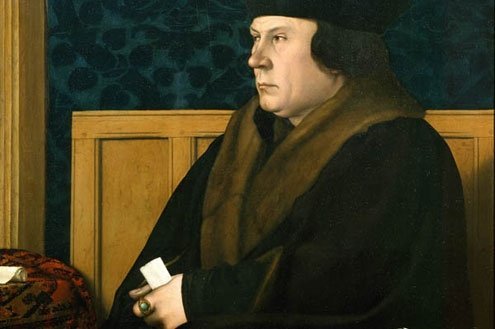 Hans Holbein the Younger's portrait of Thomas Cromwell.
I

t is always what he says: Thomas Cromwell. For Hillary Mantel’s 2009 Man Booker Prize novel, “Wolf Hall” (Fourth Estate: London, 2009), is all about “him.” In her fictionalized history of Henry VIII’s England in the turbulent years from 1517-1534, “he” is ever Master Thomas Cromwell. Acting, watching… in the present tense.

Whether in dialogue or observation, that masculine Anglo-Saxon pronoun pounds page upon page — some 700 of them in hardcover. To stage-front a protagonist, this is a heavy-handed, quirked, and risky narrator trick. But Mantel pulls it off — for Cromwell.

Through his eyes we see the sun fall on grey Thames “like a thin slice of lemon.” As her hero’s gaze roves from animal-gargoyle roofs to public hangings, Mantel drops us squarely within the religious and political strife centering Henry VIII, Cardinal Woolsey, Thomas More, Anne Boleyn, Katherine of Aragon, the Seymour Family of Wolf Hall, the Plantagenets, Archbishop Cranmer. And — within their carouseling plots and intrigues — their ever-useful Cromwell.

Short-built, burley, brilliant, brusque, bold, plebian Cromwell. Disdained by nobility. Courtiers protest: how can he enter Cardinal Woolsey’s private study, and Henry’s chambers? Cromwell is “a nobody… he’s just a person.” Yet we’re thoroughly engaged by him. Why not?

Of course readers like Mantel’s Cromwell. In him, we see ourselves. In her portrayal, he’s one of England’s first modern men. Indifferent to ancient codes, he forces a functional governing structure, at the expense of nobility and church.

In this revisionist tale, Cromwell becomes a sympathetic protagonist. Quite a task, given his real life curriculum. For his own survival and gain, Cromwell “defriends” many honorable men of his time. Delving in copious historic archives, Mantel must have used tweezers to develop a story arc in which this man gains clean moral slate.

Part of Mantel’s credibility is based on her frequent Cromwell-at-home-episodes. Here he’s surrounded by his extended, loving family. If not to make the man more sympathetic, whyever lard a tale of major power battles with so many cozy domestic interludes?

To further raise sympathy for T.C., Mantel begins her novel with flashback-to Cromwell as child victim! Again brutally beaten by his savage father, at thirteen he escapes to the continent. There he learns languages, and merchant trade. He reads Tyndale’s banned Bible-in-English. He soldiers. Studies law. Watches the growth of commerce. Cromwell is a 16th century global operator, with business links and secret political sources. They range the continent from Antwerp to Rome.

“He” knows the English nobility only honor a man who hunts, plays the lute, and jousts at tournaments. Games from the Middle Ages. “He” knows: on the continent, trade and banking have hoisted divided territories into great nation states.

When this international player is back in England, he’s soon counselor to the king, chief confident to his chief patron, Cardinal Woolsey. He and Cromwell have much in common. Two strategists. Both have caught the stir of a new age coming. The Cardinal painstakingly revises an erratic judicial system, leaving it accessible to commoners as well as nobles.

Suddenly he and Cromwell face a more obscure and dangerous task: Henry VIII wants papal annulment to his two-decade marriage to Katherine of Aragon. For Katherine has given him no male heir. Won’t this charming court lady Anne Boleyn be a more satisfying, and fertile wife for a King? The pope turns deaf ear.

France and Spain will go to war for the pope. If Henry has no male heir, the Plantagenets may claim their own path to the throne. The horrific War of the Roses tore England apart, and is fresh in memory. Henry must be free to legal remarriage… and legal heir. Fortunately for Cromwell there’s gain for an astute lawyer and go-between.

With Woolsey he patches up a few Royal Acts, and papal appeals. Woolsey moves to make Henry ruler of the English Roman Church, a king commanded by no one on earth. Negotiations with Rome proceed. Over years. At last Henry loses patience. Cromwell regrets his Cardinal’s removal, humiliation and destitution; he helps with the arrangements.

Secret Protestant sympathizer, in 1534 Cromwell sees Henry’s Act of Supremacy through Parliament. He’s created a new Church… and England for the English. Spurred the country to trade. Opened it to the Continent, and the Renaissance.

With fine sentences, and some of the best-ever period scenes, Mantel produces a fictionalized history that’s pure pleasure to read. Even for a reviewer not inclined to the genre. And not at all convinced by the author’s canted re-take on Cromwell.

One question lingers: why such consummate craft expended to clean-up intriguer Thomas Cromwell? One thought: perhaps, through this revisionist T.C., Mantel is putting heroic face on what was, in fact, England’s tortuous and bloodied path out of the Middle Ages and into the Renaissance.