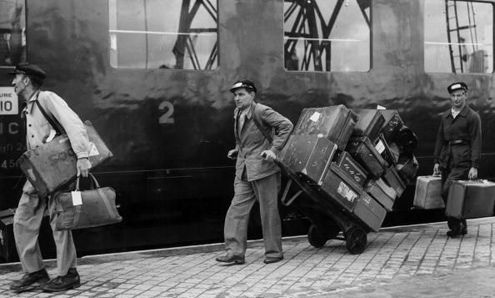 Much to my dismay, Rino was not the driver.
T

his is a story about looking for love in all the wrong places. The wrong place — in this particular case — being the rear view mirror of a crowed tour bus. It starts many weeks ago, with a letter from a love-lacerated yet buoyantly optimistic reader who described her first visit to Italy and her first, unforgettable encounter with the visual penetrations of homo-italicus. The title she has given to her story is “You Caught My Eye.”

“The first official ‘native Italian’ I met was our coach driver named Rino. He was not at all what I had pictured in my head of an Italian man… He was very clean cut looking and always had a serious look on his face. He never smiled. The first time I sat down on his coach, I remember thinking how thankful I was that such a tall and serious man was transporting us to our hotel…

He would be sitting in his driver’s seat and I would watch him in the big rear view mirror. Finally, on the third day, I realized that he was staring back at me, watching me just as intently as I was watching him. This may sound odd, but by staring at each other, it was if we were having a conversation without saying a word… At the time, I did not realize it, but I was slowly falling in love with this man…”

(Rino was unable to finish the tour because he had to see a doctor about his bad back.)

“I remember saying good bye and smiling because I was happy that he was going to the doctor (most men have too much pride to admit when they need a doctor)… When he did not return for the end of our tour, I was so heart broken. I went back home to America, but I could not stop thinking about him. So I returned to Italy a year later. I signed up with the same travel agency and the same transportation agency, hoping that Rino would be my driver again. Much to my dismay, Rino was not the driver. But the driver, Aldo, spoke very good English. So after my third day, I got up the courage to ask Aldo if he knew Rino. And this is where my heartbreak becomes even bigger. Aldo told me that Rino had hurt his back so badly that he had to take early retirement from his job even though Rino is much too young to retire. I remember asking God why bad things happen to good people…

I returned to Italy this week. I asked his employer if Rino could be my driver if I handled my own luggage, but I was told that he couldn’t work since he still has a sore back.

So my dilemma is this: I need some closure with this ordeal. I need to know if Rino is married and was just messing with me, or if he has forgotten me, or if he does remember me…. If this works out, I think I will make a movie of it titled You Caught My Eye….”

Yikes. Should I or should I not help her find Rino? Despite having been the recipient of rear mirror passion gawks myself that proved regrettably shortsighted (and a road hazard, especially driving a motorbike), I decided I would. Maybe pilot and passenger were destined to lock eyes again? Maybe Rino wanted to be found (early retirement disability pension in Italy can be as great as the newspapers make it sound)? If there was a Hollywood happy ending here — I would find it, er, him.

Finding Rino: My search started in the bus parking lots of the greater Veneto. I asked other drivers, but no one knew Rino. I then called my tour guide friend in Rome, Stefano, who has worked with dozens of drivers over the years. He did not know Rino either, but did share his observations: “The bus driver is typically silent, strong and always in command. He guides the female tourist on her sojourn, through a fantasyland far away from home where she experiences new sensations. He is the archetypal symbol of virility, escapism and safety. She watches him deftly navigate tight curves and vicoletti with his big bus, and before long, he is her hero and she inevitably falls in love.”

He said it happens on every tour: “There was the time two Swedish girls waited for the driver in his room; I see heart-shaped letters taped to the steering wheel; on one tour, an 80-something retiree stared at the back of the driver’s head for a week; once, our office destroyed a driver’s mail when he called to warn his angry wife was coming to pick it up…”

After enlightening me, as Stefano always does, he pointed me in the right direction. Another round of calls, and soon enough contact was made with Rino’s close friend. I had just begun to introduce myself and explain the situation, when the irritable and impatient friend interrupted me coldly: “Rino wants nothing to do with her.” Odd, I thought, that he would say that before he knew who or what I was referring to. I ventured forward with one more question: “Is Rino married?” The answer was a forcefully affirmative “Ehhhh!”

So, dear reader, this is one bus you were meant to miss, but I have a feeling you knew that already. Just like fish in the sea, there are plenty of drivers on the roads — although consider this one road kill. And, when that special someone does pull up, make sure he can carry your luggage.