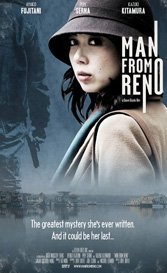 Rare turtles swimming in the toilet bowel of a San Francisco hotel room. Remember that detail. Now then, let’s backtrack. A small county California sheriff, Paul del Moral (Pepe Serno), hits and injures a Japanese man on a misty night and soon comes upon a second Japanese man dead in a nearby bog. Meanwhile, a moody young Japanese detective writer Aki (Ayako Fujitani) bolts from Tokyo to a San Francisco hotel, telling no one. Maybe she’s suicidal. Maybe she’s just sad. In any event, she meets and has sex with Akira (Kazuki Kitamura), a slickly handsome young Japanese stranger (is he from Reno?) who vanishes the next day, leaving his suitcase behind in her room. Now then, what’s the connection between what the sheriff’s stumbled on and what’s happening to the semi-paranoid Aki, a compulsive sleuth by pen-and-ink trade. And what’s the role of a reclusive businessman who lives in the sheriff’s county? Obviously there’s a crime. And there’s a budding conspiracy. With turtles seemingly smack in the middle. But how do they link up?

Director and co-writer Dave Boyle’s twisty, quirky noir gets a great boost from Fujitani, as a moody, ill-fated version of Nancy Drew, and Serna, as a good-natured lawman who can’t really fathom the strangeness that’s suddenly descended around him, at least not at first. The film’s strength is its compass-true exoticism — it’s mostly in Japanese — and appetite for false clues.

It’s weakness — or better said its excess of ambition — is an eleventh-hour Gothic veer that transforms an already complex murder-mystery into a suddenly sinister study of identity theft and the tangled web of a predatory killer. Still, that endgame plunge doesn’t make the whole any less intriguing, or bizarre, giving it the overall feel of an art house thriller with culture-clash trimmings. All in all, an alarming little treat that’s slow to uncoil.