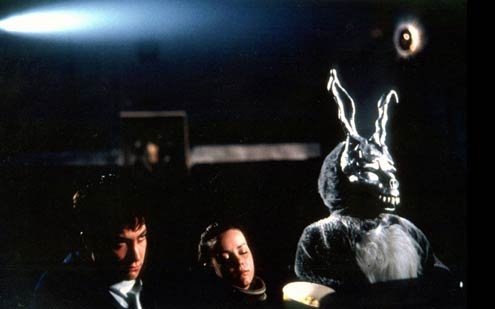 Donnie Darko (Jake Gyllenhall) and his favorite invisible bunny.
A

merican filmmakers have an ambiguous relationship with the apocalypse. They’re great with horror or the peddling of conflagration (so much that real-world bad guys mimic their bangs) but far less at home with the so-called vision thing. Omens and foretelling, once “Twilight Zone” territory, usually come with crass visual punctuation marks. Maybe it’s the absence of such simplifying punctuation that makes Richard Kelly’s creepy first outing “Donnie Darko” so durably memorable.

Is this a great movie? Probably not. Even its cult following don’t bill it as the second coming of “Citizen Kane.” What they do applaud is Kelly’s command of hypnosis. He conjures up a flight of fancy that works like a dark charm.

In 1980s jargon, Donnie is a “special boy,” brilliant, troubled, and in therapy. Spiking the punch, he’s reluctant to take his medication. He also has visions and hears things go bump in the night. Kelly opens with one of those bumps and closes with an adjusted version of the same.

When Donnie wakes to a voice telling him the world is 28 days from the occurrence of something sinister, he goes looking for the source. That’s when a commercial jet engine falls from the sky and demolishes his bedroom and parts of the family home. The offending jet, of course, can’t be located, a Twilight Zone tip-off. Real world factors only make it more eerie. Scheduled for release on Sept. 14, 2001, three days after 9/11, the movie’s engine scene was considered alarming enough push back distribution by two months (some outlets simply shelved the film). Donnie’s end-of-the-world confidante turns out to be a toothy bunny rabbit that speaks through a voice box and looks like a steam-powered Halloween costume.

Kelly keeps the potential silliness in check by giving brooding Donnie a very credible life. At school, he’s mocked by hormonal teens for having dodged death. He meets a girl, Gretchen (Jena Malone), who finds him weirdly attractive.

One by one, Kelly assembles his omens as if beading a bracelet. Donnie’s English teacher, Karen Pomeroy (Drew Barrymore), is in trouble for assigning a Graham Greene story about anarchism. The school’s mascot is vandalized by an ax. A self-help coach (a nice cameo by the late Patrick Swayze) is foisted on students only to be exposed as a fraud. An unexplained flood empties the school. Meanwhile, Donnie busies himself looking into time travel — a former teacher wrote a book about it — and continues getting rabbit-powered alerts on the countdown. The weather forecast on the 28th day is described as “apocalyptic.”

Kelly operates seamlessly on two levels. The first has mental illness flirt with shamanism — an exploration of lucid madness. The second ties non-conformity to a kind of black magic from which time and space are stubbornly detached — until time and space grow cranky, draft a bunny as a spokesman, and feel like sweeping everything off the table.

Gyllenhall’s Donnie is bewildered and mischievous male witch. The 1980s synth soundtrack (“Tears for Fears,” “Echo and the Bunnymen”) is beautifully appropriate. Rarely has a young director waved such a perfectly menacing wand over American suburbia.

Peter Weir’s early films share Kelly’s interest in the paranormal and Armageddon. He struck true in “Picnic at Hanging Rock,” but snuck even closer to the clairvoyant in “The Last Wave,” in which the end of the world is partly a result of cultural transgressions.

David Burton (Richard Chamberlain) is a Sydney barrister who reluctantly defends five taciturn rural aborigines accused of murder, apparently carried out as part of a tribal ritual. The men, who won’t or can’t talk about the killing, are drawn to Burton like moths to flame.

Weir lets information trickle out. Burton, we learn, was born in Argentina and dreams constantly of heavy rain and floods. Though he’s bewildered, the aborigines come to believe he is a walking transcendence, the link between continents.

Omen movies depend on the credibility of the lead, and Chamberlain does a fine job suggesting that something’s amiss. The aborigines, led by young Chris (David Gulpili) and Charlie (Nandjiwarra Amagula), who speaks no English, are waking amulets or goblins, but they’re also compasses. Rural aborigines are feral, with cave maps and theories. Suddenly, skeptical Burton is mesmerized. It’s then that Weir builds stylishly to his reckoning.