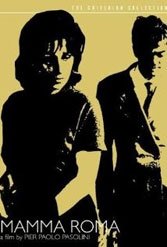 Pier Paolo Pasolini always paid close attention to Rome ghetto life, his early work reflecting the social realities of a city whose slums began sprawling in the wake of the 1950s economic boom. If “Accattone,” his debut, was a masculine portrait of the pressures of the poor life, “Mamma Roma” was its feminine counterpart.

It opens with a wedding scene in a barn with piglets wandering among drunken guests. Mamma Roma (Anna Magnani), a feisty and stubbornly proud middle-aged prostitute, joyously toasts her pimp (Franco Citti) and his bride with a song. Relieved at last of her pimp’s financial demands, she sees her life more hopefully. She can become a fruit and vegetable vendor and take care of her adolescent son Ettore (Ettore Garafolo), who has lived in the country with relatives most of his life.

But try as she does to distance herself from her past, it invariably catches up with her. Unused to city-life, her son is seduced away from school to hustle with neighborhood bad boys. Mamma Roma’s happy hubris is short lived. One by one, her aspirations are punctured. The life she desperately sought has little relationship to the one she has.

Italian authorities banned the film for obscenity after its release, typically yielding to Catholic Church objections. Interestingly, however, the script was a further development on the one Pasolini had written for Federico Fellini’s 1957 “Notte di Cabiria” (“Nights of Cabiria”). While Fellini was able to get away with an oddly warm-hearted Chaplinesque portrayal of a prostitute and her travails (winning a Golden Globe), “Mamma Roma,” bereft of similar humor and sentimentality, was ostracized.

Pasolini was determined to present a more fully fleshed-out and vibrant portrait of a streetwalker. The energetic Magnani was up to the task, displaying the raw vulnerability of a woman eager for petit-bourgeois status and security as if they were hers for the having. Though stylistically inspired by postwar neorealism, Pasolini replaced the beleaguered laborers of the genre with pimps, thieves and prostitutes. The result is poetic and painful ode to the marginalized and dispossessed.