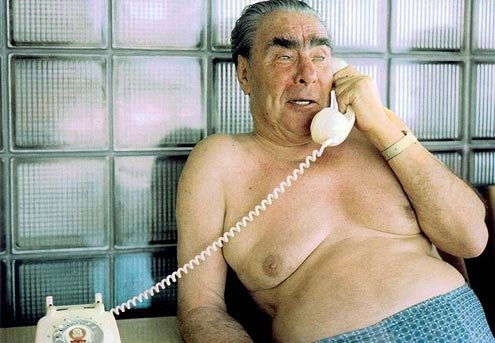 In Brezhnev's world.
I

n the 1970s my family’s Christmas season officially started a few days before Thanksgiving. That’s when my father returned from what had become an annual trip to Moscow. It was billed as a medical exchange: Every year he went to Moscow and a Russian came to the United States. But my father’s trip always included a few days in Washington and he claimed the Soviet counterparts he met were not even doctors.

In any case, the trip’s official purpose was not my father’s first priority.

Dad, a surgeon, loved an adventure, and traveling to, and operating in, Leonid Brezhnev’s Soviet Union was just that. Dad also loved adventure’s natural byproduct — storytelling. He told about the circles under the eyes of hospital staff after they’d stayed awake all night poring over the Sears catalog my father lent them. “Our government prints things like this too,” they said.

“What’s Moscow’s tallest building? It’s Lubyanka, the KGB building. You can see Siberia from the basement.”

He loved to cock a snook at Soviet officials. He’d elude his guide and go to colleagues’ houses for dinner. He’d taunt customs officials with copies of “Playboy” and other goodies he’d packed into his suitcase. He loved the exquisite irony of the government-approved private clinic where he worked. Here, the Soviets could have elective surgery — if they paid in Western currency.

He also loved the pathos and humanity that flourished in extremes. He couldn’t resist komisioni shops, where Soviets sold belongings — once again for hard currency. He rescued samovars, paintings, old linens and portraits. “Someone once loved that boy,” he said of a portrait of a poetic-looking young man who now wistfully surveys my Milan living room.

Dad also liked the moral certainty his trip gave him. The contrast between America and the darkness, cynicism, and hardness of Brezhnev-era Russia made everything we had seem right. Against the Moscow backdrop, the pig-headedness of his hospital administrators and small-town middle-class life faded away. So did personal angst, He described the feelings of lightness and freedom that increased as he moved West, via Vienna. It was like taking off a heavy coat, he said. (He once he came back via Kabul.) Returning to our well-ordered house, bright for the holidays, he luxuriated in the security of the wealthy American Midwest, and he made us feel safe, too.

Like any adventurer, he brought with him curious objects. There were icons, which he pooh-poohed but hung over his bed. You never know… Colleagues loaded him with gifts for his family; bottles of homemade firewater with grass in them, unidentifiable pickled things, fur hats, amber jewelry. Despite their precious raw materials, the furs and jewelry were debased by shoddy craftsmanship — a metaphor for Soviet Russia itself.

There were surgical curiosities; a makeshift hand-drill for wart removal and needles and suture too crude for even an American veterinarian. Communism’s complete inability to produce effective things amused Dad. He was also amazed by the human spirit, which sought improvement no matter what.

Every year he brought a kilo of the finest Caspian caviar. Its purchase was also an adventure, again involving hard currency and including a shopkeeper corrupt enough to accept a sack of oranges in exchange for a $1,000 worth of fish eggs. The caviar’s seemingly bottomless blue tin reigned over our annual Christmas party and holiday meals. Believe me, you can get tired of caviar.

If we thought it unusual that my father went to Russia every year, the Russians were really baffled — increasingly, and menacingly. He cut short his last trip (on the eve of the 1979 Afghan invasion) because the extra surveillance spooked him. So did the parties in the hotel room next door, where scantily-clad girls climbed over his balcony inviting him to join their fun.

If the people in Washington that Dad talked to had listened to him more carefully, they might have been less surprised when the Soviet Union fell apart. Dad knew the edifice was shaky, that people were tired, and that the system was morally and economically bankrupt. Russians wanted what was in that Sears catalog and they were sick of waiting.

But one thing that everyone got wrong was the idea that the Evil Empire’s collapse would bring us communism’s happy fade. No one could have foreseen that the shadow of the broken edifice would still linger 20 years later.

Instead of the happy fade, we got an America confused about its world role. We got class and culture wars — which began with the Vietnam War but were papered over by the need for Cold War unity.

We got Italy finally realizing that the world no longer forgives its defects as the necessary price of keeping the country with the West’s biggest Communist party on our side.

We got a summit on a two-tier Europe — divided along good old East- and West-bloc lines.

In the old East Bloc, we got scary nationalism and teetering economies.

In Russia they got Vladimir Putin. A few Russians can buy the stuff in the Sears catalog, but no one got fair elections. The scantily-clad girls found new callings abroad.

For 40 years the Cold War was a jerry-rigged mechanism that kept everyone believing our universe was stable, binary and morally certain. Instead it turns out to be morally, politically and economically complex. The price for that simpler and more certain world was fear. Now we have fear but no certainty.

I hardly want the fear back. But I wouldn’t mind a bit of certainty. And maybe a Christmastime kilo of Malossol caviar to share with my friends.