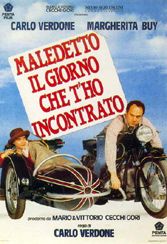 At his best, Roman comedian Carlo Verdone merged Woody Allen’s indelible obsessions — sex and neurotic self-deprecation — with a kind of vernacular slapstick that put blue-collar Rome at the center of the universe. His comedy was romanaccio, not Italian, and the city loved him for it.

Their chemistry led to this screwball comedy that is un-Italian in its joy. Bernardo Arbusti (Verdone) is a pill-popping rock music critic determined to make the definitive Jimi Hendrix documentary. When his girlfriend Adriana ditches him for a French war photographer, Bernardo mopes around with his deadbeat nightclub friends who finally ship him off to a local shrink, the laconic Professor Altieri (a Nosferatu-like Alexis Meneloff in his only role ever).

That, in a nutshell, is the movie. But it’s surefire nutshell because Verdone and Buy forge a Grant-Hepburn-style relationship that makes whatever they do quirky or ridiculous, or both. They lust for anti-depressants and rejoice when they find they like the same ones. Out of touch, they meet again in England where Bernardo is hunting down Hendrix’s “killer” and Camilla is traveling with a patronizing older man.

Verdone lampoons upscale Milan, the dubiousness of shrinks (a favorite theme), the serious silliness of conspiracy theories (Hendrix), and how love is mostly what you have in common. This is a delicious little gem that neither Verdone nor Buy — though still working hard — ever reprised or replicated.