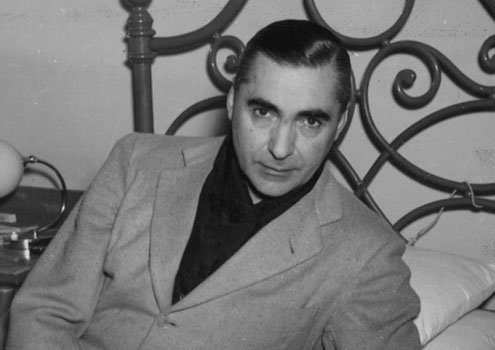 y late 1949, noted Italian author Curzio Malaparte (born Kurt Erich Suckert to a German Protestant father in Prato) had settled in Jouy en Josas outside Paris. Preoccupied with publishing his latest novel, “La Pelle,” in the United States, he sought assistance from American friends, among them the journalist and political essayist Percy Winner, who then lived in Rome and would later become foreign editor of The New Republic magazine.

Malaparte hoped that “La Pelle” set in a destitute, hedonistic postwar Naples (and first published first as “Le Peau” in France), would rival the success of its predecessor, “Kaputt,” which had sold briskly. Ultimately, it fell short.

In this previously unpublished correspondence, the mercurial Malaparte — whose pseudonym was an ironic take on Napoleon Bonaparte — parades his self-aggrandizing side. A Fascist who wrote about Nazi massacres, a would-be Communist who hosted Palmiro Togliatti, a film-maker who never abandoned writing, Malaparte was an Italian chameleon who for decades provoked the ire of the left, the right and the Catholic Church, which banned different works at different times. He also built a modernist villa on his beloved Capri.

Malaparte and Winner became friends in the 1920s, as Fascist Italy grew in global prominence, and remained in contact into the Cold War. Winner’s first book, the 1947 novel “Dario: A Fictional Reminiscence” (Harcourt Brace), featured an amoral character named Dario Duvolti, which Winner modeled on Malaparte.

By the time of his death from lung cancer in 1957, Malaparte was regarded among the most independent, influential and controversial Italian writers of the last half of the 20th century. He converted to Catholicism hours before his death.

These are unpublished excerpts from the 1949 Malaparte-Winner exchange. They were translated from the Italian by Christopher P. Winner.

I’m sending you a copy of my newest book, Le Peau, which has just appeared in France, provoking tremendous interest. The success is even greater than that of Kaputt. I’m pleased, naturally, but I’m a little concerned about the matter of Dutton and Co. I am not, nor can I be, pleased with Dutton. That “Kaputt” did not have the sales success of “Gone with the Wind” I understand: But that it yielded me only $1,800 is something I do not understand, and do not accept.

I would be very grateful if you did this, and also if you could indicate to me a publisher in New York who might be right for my book, and give me their address so that I can get them a copy of the book to examine.

Why don’t you write to MacMillan?

So read the book, and then tell me what you think.

Thanks for your letter and for your great kindness. But I think that before choosing a publisher to get in touch with, I should wait until you have read “La Peau.” That way you can give me greater insight. Not all publishers are right for “La Peau.”

Among the names you gave me, the one of Knopf (which some time ago telegraphed me asking for my new book) is one I would exclude, because they have a bad name among French editors. It seems they don’t pay, or pay poorly.

I am very curious to know what you’ll think of the book. Will you, an American, find that my “humor” isn’t appropriate for America? And is that my fault? The book, even its most amusing pages, remains serious, and sometimes very sad.

In any event,[it]has been a huge success… I am naturally very pleased, particularly because to publish a novel so soon after the success of Kaputt was a hard and risky enterprise.

You know what success means: Sooner or later they will make you pay for it. Thank you, dear Winner, and read the book, if you can’t get to sleep at night.

Thanks for your letter and your advice. I have sent the book to the addresses you suggested but I think you may need to alert the recipients, your friends, with a letter to each of them. Maybe you can tell them that this is a book that might provoke scandal in America, if it’s published as is, with no cuts. But you can tell them it’s a book that must also be published in America.

… I am very curious to know how the book will be received in America (In Spain it was banned: which means the Spanish edition will circulate in Argentina and in other countries in Central and South America.)

I also sent copies to Bennett Cerf and Clifton Fadiman, as you advised. In this matter I intend to heed all your advice, and give myself over wholly to you. You know about men and things, and the world in which the Americans think and act. Write to your friends, including Slocombe.

…You have probably seen the first French reviews, which are excellent, in the sense that they are controversial, naturally, but they acknowledge the great talent of the author (pardon me: that’s what they say) and speak of ‘a hard book, a great book.’ Generally, the reviews are better than those for Kaputt … By better I mean better and polemical, as is always the case with my work.

I wrote you last Saturday and await your response daily. George Slocombe wrote an excellent review. … in the New York Herald Tribune, and speaks of ‘a great piece of writing.’ The criticism, contrary to what I feared, is generally good, full of praise for the book and the art of the writer. I’m sorry if I tell you these things, it’s just to keep you informed. Even the critics who don’t like me speak of the ‘grandeur’ of the book. Sales couldn’t be better: we’re at 28,000 copies. … I am amazed. As you can see, Winner, even at 51 one can remain a child in certain things.

Tomorrow I’m off the Brussels where, according to what I am told on the phone, the bookshop windows are filled with my book, and with my portraits. Ah, notoriety!…

Americans in Paris, or passing through Paris, want to get to know me. …Tomorrow morning I have lunch with Giustiniani, counsel of our Italian embassy, who has assembled a bunch of Americans in front of whom I will have to “parade,” as is the custom….

As soon as you have news from American publishers please tell me. It’s not a matter of wanting answers at all costs, but there is a certain urgency: MacMillan London wants the rights to La Peau for England and the United States but I hold out, responding vaguely. That’s why I’m on edge, awaiting your news.

Greetings, dear Winner, and grateful thanks from your, Malaparte.