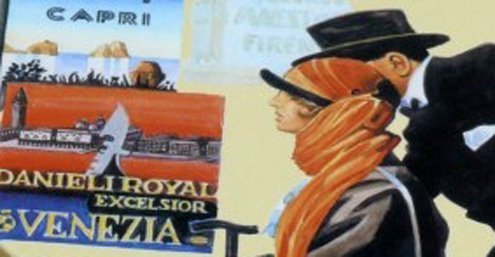 Italy inspired nostalgia for decades, but places now matter less than food.
I

cried the first time I flew out of Africa. I sat numbly gazing down as the plane pulled away from the thick gum tree foliage and the red dirt roads I’d gotten to know intimately. That moment taught me mal d’Afrique, the inexplicable sense of loss and heartache rooted above all in a place. When it bites hard, the Africa bug leaves you bittersweet and charged with mysterious longing and nostalgia.

Like Karen Blixen and H. Morton Stanley, I tried finding rational culprits. But I could only come up with images: the proud demeanor of women as they walked along country roads in search for water, work, food with an infant strapped to their back; the mixed smell of the wild savannah; the incomparable vastness of the sky.

A similar kind of irrational, romantic attachment enters American journalistic essays on the Italian experience. The angle? Very often it’s food. Long-form articles promoting Italy speak less of Stendhal Syndrome and the Bel Paese’s world-famous artistic attractions, natural wonders and historic treasures than of the eating experience. These enraptured pieces, a mainstay in newspapers and magazine, prompt a mal d’Afrique-style question: What it is about the Italian mood (and the food) that sweeps Americans off their feet and leads them to write unbridled love stories and food-forward reportages?

I don’t question the depth of the love, or even if it’s justified. I’m just curious what it is that makes gli Americani predisposed to going nuts for nocciola gelato, crazy for carbonara and gaga for gnocchi, creating a cottage industry for food writers, expat bloggers and food guides.

I’m not complaining. I’m a part of that industry. Yet I remain curious about what produces and sustains the rapture, since in fact lots of Italian food is far from stellar. Larger, more tourist traveled-cities are rife with local media exposés on mediocre, microwaved food peddled at inflated prices to locals and first-timers alike. But those aren’t the stories that go global. Why is it, for example, that when I throw in occasional blog mentions of the Camorra, bad management and cultural decay, painting a less-than-poetic portrait of Italy, my readers implore me to hurry back to the more inviting portrayal they crave and seem to know by heart?

I recently put the question to several trendsetters in the food-writing world and travel media, and got a surprising variety of responses.

Italy and food, most agreed, were tied at the hip. The country’s ecosystem of regional cuisine is a culinary treasure trove with dishes and trends that come in phases that are transmitted across the Atlantic.

The “arugula on everything” phase was followed by the radicchio moment, which was superseded by the frittata and risotto crazes. Then came the exalting of Roman-style offal and porchetta-mania. What’s considered everyday food in specific Italian cities or regions is periodically lauded by foreign media, and promptly becomes a staple on big-city American menus. Last year, for example, everyone was focused on cacio e pepe. This summer, my clients wanted to know all about arancini.

So is it just fashion? Does Italy’s unending catalogue of food options trigger food infatuations that in turn inspire alimentary dissertations? Maybe.

Another mal d’Italie is theory is that it’s generated by the average American’s own poor taste. To me, that’s flat-out wrong. And if it was ever right (in the postwar, pre-global age) it’s now outdated. Americans, whether travelers or at home, now have a sophisticated palate. They’re far more informed on food than anyone’s taught to think. Moreover, the ingredients necessary to making authentic Italian dishes are no longer so hard to find, even in remote parts of the U.S. Duplicating a beloved dish back home isn’t reserved to residents to Manhattan, Portland, Austin and Northern California.

And while the cliché of American travelers seeking out the perfect pizza, authentic amatriciana and the best fiorentina may still stand, it has nothing to do with poor food or bad taste at home.

I have a slightly different view of what’s going on. I think the reason Americans are so mesmerized by the Italian mangia experience is that food plays such a consistently starring role in Italian culture. Food is always in plain sight, whether it’s on a table or at the source of conversation. Italians plan their next meal while consuming the one at hand. This rubs off on visitors at a subliminal level. Moreover, the ridiculous density and variety of eating options makes the idea of skipping a meal (still not the end of the world in America) virtually inconceivable.

American clients often ask me what historic monuments are located near a given restaurant, not the other way around, which I think demonstrates this cultural difference.

Another factor is the drop-off in the mention of “Made in Italy” goods, whether Fiat, Ferrari or Valentino. Some are on the outer edges of the affordable. Others have been bought by foreign concerns, making them that much less Italian.

In response, the travel industry has embraced food as “Made in Italy” newest and most marketable asset. Italy’s gastronomic biodiversity in relation to its size is as close as it gets to infinite. Though Italy fits into California several times over, it has some 2,500 varieties of grapes, another 2,500 olive varietals, and 20 regional cuisines that each boast countless specialties.

No nation comes close to matching Italy’s expanse and variety. This means foreign visitors are under constant bombardment from local food culture. There’s no escape.

And that may be the rub. Americans love choice more than anything. The Internet has proved it. They love variety. They can’t live without the excitement of options. Enter Italy, queen of options.

In the end, mal d’Italie may have less to do with Italian comings and goings than with a craving to have everything the country has to offer, which is so boundless as to make for rapture — producing articles intended to remind you of what you’re missing, or might be.