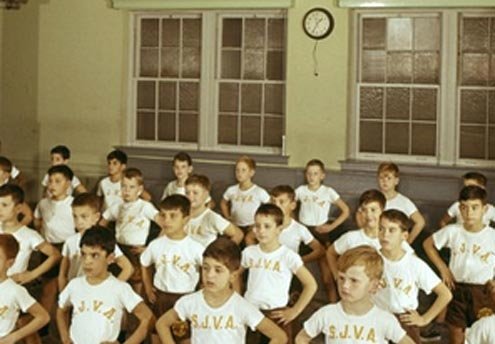 Gym class loudly and openly took in the insults and ridicule suppressed or even punished in classrooms.
A

t 52 years of age, I am standing poolside in downtown Milan doing my physio warmup before I put in a kilometer. Like many gay men, I look after myself, watch my weight and go to the gym four or five times a week. Gianluca is in the end lane doing his hour. He’s not fast but he rarely misses a day. Here comes Giovanni the giant with his boyfriend, Antonio the body. Antonio, who is 45, wants to do triathlon and Giovanni is training him in swimming, usually the problem sport for triathletes. The two of them wave and jump in the pool. I finish my warm-up find myself in a lane with Dani, a shy and awkward 26-year-old boy who wears baggy blue cotton boxer shorts. His body is pasty and soft.

He says “Hi” and asks me if he has improved. “Your stoke looks great,” I tell him. “You said I was a natural, right?” He’s been saying the same thing every week for the past few months. “You’re a natural,” I reply, “but don’t forget to extend your legs when you kick.” He smiles and continues his workout.

I know all the regulars at the gym. We’re the ones who come out all year round, and not just after holiday binges or just before vacations. Some do endurance work while others prefer weights. Many of us are gay, but the rule is “Don’t ask, don’t tell.”

In North America, gym work is the norm. But lofty ideals aside, what’s learned? Sexual orientation aside, physical education was never welcoming or rewarding. It was usually a “class” where the strong and the agile — boys, correctly masculine — publicly humiliated the weak and awkward. Gym class loudly and openly took in the insults and ridicule suppressed or even punished in classrooms. Some of us learned we weren’t good enough, defective and inept. Most gays I know returned to the gym later in life, perhaps looking to reclaim what was denied them as youths.

Big-time out athletes are few. Two of my favorites are American Olympic champion diver Greg Louganis and Canadian gold medal swimmer Mark Tewksbury. I’ve read Louganis’ autobiography, “Breaking the Surface,” which I recommend. I also remember Tewksbury doing an ad for the Alberta Beef Association. He appeared smiling and said, “I eat beef.” Tewksbury later lost a six-figure contract as a motivational speaker because he was, “too openly gay.”

Identifying gay athletes on sports teams is like searching for Big Foot. There are lots of sightings but little hard evidence (no pun intended). Though local communities of gay football, baseball, hockey, volleyball and basketball players are growing, most of us learned growing up that team sports are hetero territory, which we avoid as a rule.

We all have gym class memory. Mine is from seventh grade at Elginburg and District Public School. I was 12. In those days, the standard gym outfit was high-top runners, white sports socks, elastic waist cotton shorts, and a white T-shirt. I wore low-rise runners that some boys called girl’s shoes. I also had brown socks (I didn’t have any sports socks), long khaki shorts to hide my chubby thighs, and a kind of baggy blue polo shirt to cover my belly and chicken arms. Maybe I could have asked my mother to buy me proper gym clothes but I didn’t think I had the right: gym clothes were for real athletes.

As I always, I had carefully positioned myself at the end of the line-up to avoid as much play as possible. On the court, I placed my feet apart, bent my knees slightly, and held my hands wide, the way I had seen the good players stand. I wanted to give the impression I was ready to pounce on the ball with cat-like agility all the time praying it wouldn’t come my way.

Kevin, a small uncoordinated boy, had the ball. He flubbed the shot. Someone on our team called him “a loser” and the other team laughed. Now their star player had possession. Surely they would dominate the rest of the game and win. I would have survived another gym class without actually having to touch the ball.

But the star’s shot fell short. We got the ball back and it was my turn. My teammates groaned and someone yelled “Fag.” I wondered if had missed the class where the teacher explained the rules of the game. I wondered if I could even handle the ball. But I focused my energy and decided to copy what I’d seen all the other kids do. So I shot.

Everybody watched as the ball sailed across the gym almost touching the ceiling. Down it arched, towards the way far end of the court. The next and only sound was the whoosh of the net as the ball plunged perfectly through the basketball hoop like a bird returning to nest.

The students roared with laughter. The gym teacher huffed, rolled his head, and blew the whistle. Gym class was over. I had sunk my one and only basket, my moment of glory.

Too bad we were playing volleyball, not basketball.

I hurried out of the gym, changed, and went to French class early.