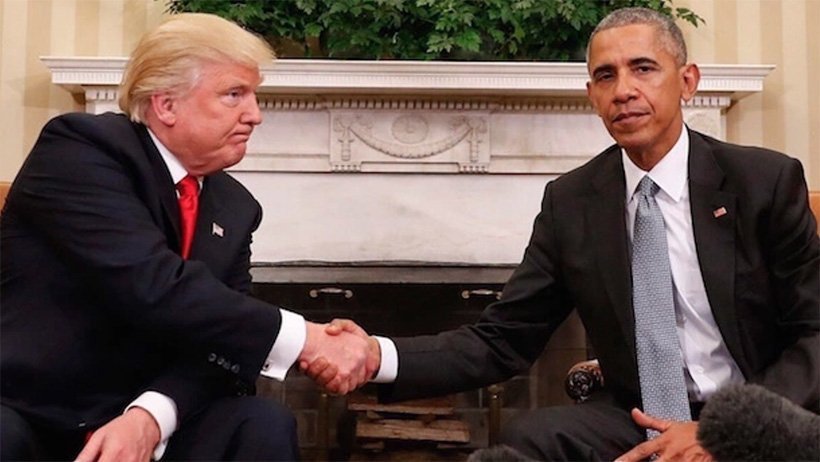 If you made it, I can unmake it…
T

here is nothing one president made that another cannot dismantle, or try to. This simple bromide rooted in playground politics never got much of a public airing out until now, when Donald Trump seems determined to undo if not humiliate the key domestic and global policies constructed by Barack Obama. Climate accords have been shredded, taxes overhauled, social welfare raided, and a now, a nuclear deal with Iran cancelled unilaterally. What has not been formally dismantled is Obama’s Affordable Health Care Act, something that Trump and his allies still chafe at. So they turn elsewhere for redemption, if not revenge.

What matters less in such emotionally swampy scenarios is the imperfection of Obama’s projects, and all were imperfect. What matters more is that the tone of their undoing feels and sounds bullying, part of a destructive get-even process that mostly exists outside diplomatic or similarly rational concerns.

Obama’s centerpieces are being shucked because they were created not by any Democratic Party enemy but specifically by Obama, the man who, according to the impressionable Trump’s assertions — never mind whether the assertions were half-facetiously or entirely in earnest — was in fact a closet Muslim who’d lied about his modestly true blue origins.

Trump’s behavior in response is not so much America First as new-kid-on-the-block tree etching, “D.T. was here,” adolescent in tone and righteousness.

Trump’s dismantling of the Obama legacy feels like part of a destructive get-even process that mostly exists outside diplomatic or similarly rational concerns.

Don’t get mad; get even, goes an American bromide popular in macho culture, and Trump appears to revel in getting even, perhaps a carry-over from the nastiness of real estate bidding wars. He shines at such moments, as if vindicated, and believes in himself with unsurpassable fervor. Any undermining of Obama is a triumph that reflects not only a personal accomplishment, but also satisfies those supporters convinced the two-term president was an anti-American fraud seemingly created to torment them. This sentiment, latent at first, crept into middle class thinking as the intellectual Obama increasingly lost contact with a side of America that has little interest in the vicissitudes of constitutional law, let alone finds much to like about an open-minded Harvard education — let alone, when push comes to shove, in a black face. The failed Tea Party was the first whiplash.

Trump’s Iran deal pullout, decided on despite pleas from some of Trump’s European pseudo-allies, France’s cold-blooded Emmanuele Macron, and British Foreign Secretary Boris Johnson, proves to those who had lingering doubt that Trump will, if technically possible, move to dismantle all that he dislikes, suiting himself and making good on campaign pledges regardless of changing circumstances. In his case, the presidency does not make the man. This anti-political politician was long ago made.

The campaign matters in particular since what Trump most enjoys about the presidential process is stumping and thumping, taking in applause, digging into what airlines, referring to movies, once called “the entertainment portion of our program.” He badly wants a chance for a 2020 encore, and is building a platform for just that by doing something many presidents never do, fulfilling outlandish promises.

North Korean Kim Jong-un did Iran no favors by suddenly cozying up to the Seoul, and to Trump. Left momentarily enemy-less, at least rhetorically, he was able to direct full attention to Iran, thus circling back to the biggest enemy of all, Obama.

After Obama’s 2012 re-election, it became popular practice in some evangelical households to give thanks at Christmas not only for a prosperous year at an end, but also because another year gone brought that household, and the country, a year closer to the end of Obama’s final days. Call it cheerful loathing, or patriotism by subtraction.

Trump read many such cards and wrote more than a few on social media. Now he can send them by the millions and ensure they’re delivered.