Make Sure They Pass 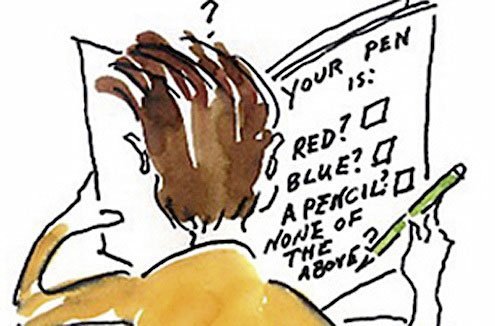 The economics faculty needs to graduate more students.
I

t’s the 1990s. Seven of us instructors of English, lecturers — “lettori” in Italian — teach in the language section of the local Italian university’s economics department. Nigel, our boss, is an Englishman with a three-year degree from a redbrick university. He’s recently been promoted to associate professor.

We “lettori” often speculate on what brought Nigel to Italy. His wife is Italian, an ex-student who came to him fully equipped with a 17th century farmhouse, acres of farmland, two doting parents and a 300-year family history. They have no children but many hobbies.

One of his is calligraphy. All his official and unofficial interoffice communications, often sarcastic, are in medieval Franciscan script. His tiny, perfect doodles during staff meetings also have a medieval quality. Another of his hobbies is research on a famous 19th century children’s author. Nigel’s CV on the university website announces that he is an expert on “letteratura infantile.” John, our big Irish colleague with a vitriolic tongue, suggests that Nigel must know most about the “infantile” part.

Nigel is tall, very thin, and has a mincing walk. I theorize he came to Italy to strike it rich as a male model in Milan. I imagine him swishing down the catwalk. His rosy complexion and wardrobe — all new — reminds us of Rex Harrison’s in “My Fair Lady,” a virtual parody of what Italians and Americans believe British professors wear… tweed jackets, corduroy trousers, brogues. That Nigel occasionally sports a bright pink button-down shirt confirms my suspicions.

John says he knows the kind. “Probably knocked up some waitress back in Liverpool and had to escape her numerous Catholic brothers.”

If Nigel is Professor Higgins, then we are all his Eliza Doolittles. His job, he says, is to modernize us. He says he was chosen by Prof. X specifically to do this job. We know better. How he got his job is a study in Italian university backbiting, sycophancy, fixed tenure boards, and pilfered competition questions. The truth is, Nigel’s many years of slavish copyediting and ghostwriting in English for a powerful professor with connections, a “barone,” have finally paid off.

We “lettori” believe Nigel is the beneficiary of a complex arrangement, a sleight-of-hand nepotism in which protégés are exchanged, shell game style. A professor at U of X tells a prof at U of Y: “At my academic employment commission meeting, I’ll vote for your son/daughter/faithful drone worker for a position in my department, and you do the same in yours.” Nigel is now an “associato,” a winner of a “competition,” though he admits he cheated. But he is protected. If he chose, he could do nothing for the rest of his life.

We ask Nigel what “modernizing the department” means. He tells us the economics faculty needs to graduate more students. Italy’s overall graduation rate is the lowest in Europe. For every 100 first-year students, only 20 leave with a degree (though each student has five exam sessions every year; five chances to pass). If a student fails, he takes the exam again, and again, until he makes the grade. But economics students are notoriously bad at languages, and — poor things — easily discouraged. According to Nigel, they fail the English exam half-a-dozen times and then drop out.

The dean is furious that upstart foreigners have screwed up his grad rate by failing students who can’t read, write, or speak English. The Italian economics professors, he says, are far more “flexible” than we are. Bell curve perfect, they pass 60 percent, without regard to actual student performance. We have to get off our high horses, or pedestals, and do the same for our English exams.

Of course, we balk. After all, we have standards. We refuse to pass students who can’t conjugate the verb “do,” who think “deficit” means “deficiente” — “idiot” in Italian. These are future top managers who can’t order a cup of coffee at McDonald’s.

In an operatic department meeting with the dean and his henchmen, we are cajoled, ridiculed, then thundered at, and eventually threatened with dismissal. This is not only because of our “un-cooperative attitudes,” but also because we have asked for status as permanent employees. Everyone else working at the university — profs, assistants, secretaries, maintenance staff, and janitors — has permanent status.

In addition, we have asked for raises, having discovered that the janitors make more money than we do. The janitors also enjoy many more perks: maternity leave, a “thirteenth month” bonus, unlimited sick days, representation on the faculty council and a state workers’ pension. The labor laws in Italy are liberal in the extreme: No one is fired unless they physically attack the boss or get caught stealing red-handed . These laws do not apply to us. We are foreigners.

We try to negotiate. We cite university employment standards elsewhere in Europe. We ask for permanent contracts and immediate raises. We are threatened. With families to support and no union behind us, we cave in and shut up.

Nigel tells us he is relieved there will be no more “unpleasantness” and settles down with his latest toy, a state-of-the-art computer program designed to invent multiple choice questions for exams. Multiple-choice questions have one right answer. They are easy and fast to process, no small matter when you consider we have hundreds of hand-written exams to mark six times a year. At first, the Americans among us approve of the changing of the cumbersome exams. We have always seen these British-style exams as endearingly quaint, and have put up with the extra work, just to keep the Brits happy. But the multiple choice questions seem like a kind of liberation — a way to say to the student, “Look, either you know it or you don’t. The question can’t be ‘interpreted’ in your favor. There is one answer, and you didn’t choose it. You fail. Go home and study. Or better still, show up more than three times a semester.”

The multiple choice exam would also be a way to avoid endless hours of listening to flunked students, who at age 20 are already experts in Italian persuasion: heavy Latin charm, exquisite manners towards older staff (hand-kissing, even), name-dropping, fake interest in all things American or British, and, at worst, sly attempts at bribery.

At first, our students’ phantasmagorical excuses for never cracking the English textbook were entertaining:

“I was at the library studying English, when back home my tomato sauce boiled over and caught fire. My roommate went berserk, and the neighbors…”

“My great-aunt fell out of the silo last week.”

“My dog eats the list of past tense irregular verbs.” (Every day?)

“My dad skipped the country.”

“I left my English notes at the disco and someone spilled Lambrusco all over them.”

“My car was stolen, so I had to spend three days at the Carabinieri, filling out forms.”

Or the excuse that these kids use often and effectively on their Italian professors: “My mom is in the hospital, having a hysterectomy.”

The Americans among us support Nigel’s efforts to introduce multiple choice questions, though we smirk when he says the move will be revolutionary and put us on the language-teaching map. We know the multiple-choice debate raged in the United States in the 1940s.

The British insist they like the old system. They realize multiple-choice questions mean the beginning of the end for foreigners as university instructors. It opens the door to hiring local teachers who speak little English but are well-connected. They’ll come into our classrooms, let students behave passively, then hand out one of our multiple-choice exams — and pass 60 percent. Thus, economics students will avoid wasting time studying English, and the teachers won’t need to know colloquial English, make lesson plans, evaluate skills, coordinate with others — in other words, teach. The dean will be thrilled.

The Brits are also against multiple choice as a matter of principle. Multiple-choice questions will impoverish the language. (“Just listen to American English, will you?”) For every question in English, they say, there may be many answers, depending on situation, speaker, and tone. Nigel is unhappy. He says we must find questions that have only one right answer.

“Or better,” Nigel injects, “Rubbish bin,” thus throwing a sop to the Brits.

We follow instructions, and at the next oral exams we wonder aloud in front of Nigel why the students appear to have memorized the textbook, especially the dialogue sections.

To challenge the memorizers, we ask, “Where can I get a cup of coffee around here?”

One student answers, “There are five coffee cups in the kitchen.”

At a staff meeting a few months into the modernization process, we ask, “What’s the use of teaching English here, or, for that matter, making English a degree requirement, if we have to pass almost everyone on every exam?”

Nigel turns pink and admonishes us to never ask that question of any Italian at the university. “You’ll be out of a job within minutes,” he snaps. “You people, remember, can be fired.” We’re not the janitors.

John says, “Maybe we could ask the question in English, not Italian. Nobody in this university would understand it. They’ve all passed our exams.”

Nigel gives John a blank stare and carefully checks a box on the sheet of paper in front of him. Reading upside down, from three feet away, I see the words “meeting,” “analysis,” “response,” “lettori,” “John.”

John has been pinpointed as a troublemaker. For the rest of the meeting, we are unusually quiet.

Nigel drones on and on about statistics and techniques for writing multiple-choice questions.

John interrupts him to ask, “I wonder what the statistics on exam pass rates are in German, French, Dutch, and Spanish English departments. What do you think, Nigel? Sixty percent?”

The rest of us remain silent. I count John’s children in my mind. Was it three or four? Is his wife pregnant again?

I can almost hear my colleagues wonder, “What the hell am I doing here?”

A decade later, my colleagues still ask the same question. And me? After 17 years of university teaching, I retired on a housewife’s pension.

About the Author: Corbitt Nesta

Corbitt Nesta is a retired EFL and Italian/English translation college instructor, better known in Italy as a lettore. She has always enjoyed a good story and wrote them in her head for years. On Sept. 11, 2001, she realized that life was short, and she'd better start doing what she had planned to do on landing in Italy in 1967: write. Her short stories, essays and articles have appeared on Eclectica.com, The Summerset Review, East of the Web and in The Snow Monkey, Transitions Abroad Magazine and Lunch Hour Stories. She lives in Lombardy with her husband of many years.