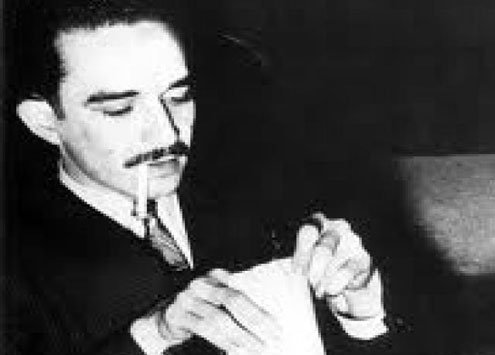 For Márquez, Rome was a way out of trouble in his native Colombia.
A

1955 rumor that ailing Pope Pius XII was on his deathbed turned out to be a godsend for El Espectador reporter and future Nobel Prize winner Gabriel García Márquez. A series of exposés written by Márquez for the Colombian newspaper detailing the harrowing plight of Luis Velasco, the sole survivor of the shipwreck of an ill-equipped Colombian navy destroyer loaded down with contraband, had caused a sensation in Bogotá. With the liberal daily El Espectador already under fire from dictator Gustavo Rojas Pinilla’s camp, the paper’s editors decided to send Márquez to Italy to cover what was believed to be the pontiff’s imminent demise.

At 27, El Espectador‘s newest foreign correspondent was already one of Latin America’s leading reporters. Márquez covered the Geneva Summit (Cold War negotiations between Britain, France, the Soviet Union, and the United States) before arriving in Rome in July 1955 only to find that Pius, who had become gravely ill the previous year, was still alive (he would die in 1958).

Márquez, later to become a key figure in Latin American “magical realism,” turned his attention to feature writing and the ins and outs of Italian postwar nightlife. He picked up on the baffling and highly publicized 1953 death of Wilma Montesi, an aspiring actress from Rome whose body was found on an Ostia beach. Newspapers speculated she’d just left a local opium den frequented by debauched government officials and businessmen. Márquez’s investigative series on Montesi, whose death he hyperbolized as the “scandal of the century,” ran for two weeks in September 1955.

Márquez, known as “Gabo” to his friends, traveled north to attend the Venice Film Festival, sending back dispatches on the likes of Hedy Lamarr and Sophia Loren. After traveling through Austria, Poland and Czechoslovakia, he returned to Rome in October, renting a room at a pensione in Parioli, an affluent north Rome neighborhood. He struck up a friendship with a fellow tenant, Rafael Ribero Silva, a Colombian tenor who assumed the role of Italian teacher and novice tour guide.

But their favorite pastime, according to Márquez, was hanging out with Rome’s prostitutes: “We would ride on [Silva’s] Vespa, he driving and I sitting behind, and bring ices and chocolates to the little summer whores who fluttered under the centuries-old laurels in the Villa Borghese and watched for sleepless tourists in the bright sun.”

Also a film critic in Latin America, Márquez decided to enroll at the Centro Sperimentale di Cinematografia (Experimental Film Center), located close to Cinecittà, the iconic film studio on Rome’s Via Tuscolana. Márquez was drawn to Italian neorealism, a film movement that portrayed an impoverished, postwar Italy on reject celluloid – in stark contrast to the country’s glamorous dolce vita image. “Today you can’t imagine what the emergence of neo-realism at the beginning of the 1950s meant for our generation,” Márquez reflected in the 1990s. “It was inventing the cinema anew.”

“The Bicycle Thieves” (1948) and “Miracle in Milan” (1951), both directed by Vittorio De Sica and written by Cesare Zavattini, had a profound effect on Márquez. He had covered the 1950 premiere of “The Bicycle Thieves” in Colombia, writing in his review for El Heraldo that it was “the most human film that has ever been made.” The film’s portrayal of worker solidarity and working class despair resonated with Márquez, a native of Aracataca in Colombia’s notorious “banana zone” where laborers had clashed with the despotic United Fruit Company in the 1930s.

Márquez’s wanted to learn how to write screenplays under Zavattini, and to prepare himself for the loftier goal of one day establishing a successful film industry in Latin America. But screenwriting courses were integrated into the larger teaching program, keeping him at arm’s length from Zavattini. Aside from a minor production assignment on the set of an Alessandro Blasetti film, Márquez’s student experience at the CSC went nowhere.

But his student days did help connect Márquez to other Latin American cinephiles living in Rome who would later be instrumental in Márquez’s quest to establish a viable Latin American film industry. Argentine filmmaker Fernando Birri, who had fled the Peronist regime and who worked as an assistant director to De Sica at Cinecittà, took Márquez under his wing. Márquez and Birri, both close friends of Cuban President Fidel Castro, would collaborate on several film projects over the years. They were joined in 1986 by another friend from their Rome days, Cuban filmmaker Julio Garcia Espinosa, in founding the Escuela Internacional de Cine y Televisión (International School of Film and Television) in San Antonio de los Baños, Cuba.

Rome and neorealism would influence Márquez long after he left the city for Paris in January 1956, most notably in his re-telling of the miraculous tale of Margarito Duarte, “the character in search of an author that we novelists wait for all our lives.” Duarte was an intellectual from the Andes who had roomed at the same pensione in Parioli as Márquez. In a pine cello case, he had brought the body of his deceased daughter — amazingly weightless — in hopes of securing her canonization by the pope.

The narrative first appeared as a 1981 newspaper article, “The Long Happy Life of Margarito Duarte,” and again on as part of “Miracle in Rome,” a 1988 film co-written by Márquez and redolent of “Miracle in Milan.” Mingling fiction and autobiography, and told in full-blown magical-realist style, Márquez’s short story “The Saint,” his third go at the Duarte story, is his most personal on the subject.

Márquez is the fictional narrator, a nostalgic raconteur who runs into Duarte — who is still waiting for the pope to hear his story — at an old haunt in Trastevere some 20 years after they first met, when Márquez was a film student at the CSC. At one point, Márquez recalls a debate among film students over the role played by the miraculous in European and Latin American reality, a debate generated by none other that his screenwriting instructor, the inimitable Zavattini.