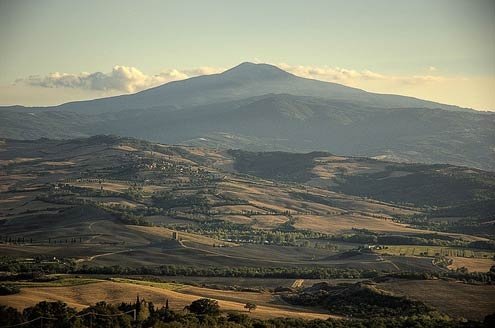 Monte Amiata is part of a lava dome complex in southern Tuscany.
T

he ancient Etruscans viewed Monte Amiata — a volcanic dome in south Tuscany — as a magical mountain and a home to their gods. It certainly has a hold on me.

I returned to its slopes for two events, a lunch and wine tasting at Castello di Potentino, and a wine-and-literature evening (the Italian serata eno-letteraria sounds better) in the small town of Sorano.

Charlotte Horton makes the wine at the 11th-century castle. A tall, distinguished Englishwoman, she left behind her wellbred life as a London writer in 1988 — her stepfather is the late novelist Graham Greene’s nephew — and moved to the family home in the Tuscan Maremma with the idea of making wine, olive oil, and pecorino cheese. Unlike many foreigners (and wealthy Italians) who trooped to Tuscany to pursue “gentleman farming,” she wanted to get her hands dirty, and still does.

When I rang the Castello bell, it was Charlotte who opened the gate, showing me through a courtyard that includes an arched loggia, potted boxwoods, and a stone well, with the sprawling valley as a backdrop. Inside, we walked through the dining room whose antique table seats 20 (with matching dark oak chairs) and into a 16th-century kitchen where a fire blazed brightly in the massive stone hearth.

Charlotte and her half-brother Alexander Greene run the winery together. She manages the vineyards and cellar while he deals with administration, marketing and logistics. Side-by-side, they work fiercely to preserve traditional farming and winemaking techniques, but not without being receptive to occasional innovation and experiment.

Locals thought Charlotte was crazy to plant vineyards on Monte Amiata’s daunting slopes (it is a 6,000-foot high mountain, part of a volcanic complex), but she soon silenced her doubters. The higher altitude microclimate, which combines cold mountain air with daytime sun that warms the vineyard, produced extraordinarily favorable harvests. Her wines, especially the pinot nero, is widely recognized for its elegance as well as the mineral flavors brought out by the volcanic soil.

Before lunch, Charlotte offered me a taste of her experimental pinot nero, vinified as white wine not red. Champagne-colored, it had a lovely, light and crisp flavor. With lunch, we drank the Castello’s Sacromante DOC Monte Cucco Rosso 2008 (sangiovese) and Piropo IGT 2008 (pinot nero/sangiovese/alicante). Charlotte cooked fresh greens and Alexander served homemade farinata (a chickpea and olive oil pancake). We paired the delicious meal with debate about the overbearing nature of wine guides and Italian bureaucracy.

Later in the afternoon, I joined them for the hour-long drive to Sorano, an Etruscan village dug from a tufa cliff on the other side of the mountain. There, the Osteria L’Ottava Rima hosted a Castello Potentino tasting and a talk by British author William Blacker (his 2010 book “Along the Enchanted Way,” about life in rural Romania, was recently translated into Italian). The joint event (only Italian was spoken) was held in the osteria‘s grotto, probably carved by Etruscans. The audience was an interesting mix of locals: Italians, Americans and English.

Blacker told an intriguing tale. He grew up on a large country estate in Sussex, attended Eton and Exeter University, and was casting about for adventure when the Berlin Wall fell in 1989. He went to Berlin but ended up driving nomadically eastward, into the primeval Maramures region of Romania. People there lived in a time warp, separate from the modern world (one reviewer called his Maramures portrayal that of a “Grimm’s fairytale land.”) The villages contained a mix of Romanians and Saxons, whose ancestors arrived in the region 800 years earlier and still spoke German.

In 1996, he returned to the region, this time spending four years there and learning Romanian. He fell in love with a gypsy woman, and when that relationship faltered, became involved with her sister. He had a son by her who is now seven. Though Blacker goes back to Romania periodically, he mostly lives in a Sorano tower, which he renovated.

Then it was Charlotte’s turn. Her story was local, about life in the Maremma and on the Amiata. Both she and Blacker, she said, had sought to document and preserve traditional ways of life on the verge of extinction. Blacker had written a book and she had produced “a liquid version of a book I might have written.”

Both liquid and book are worthy of their magic mountain.