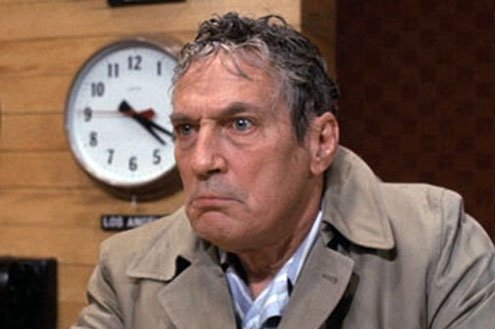 Peter Finch as Howard Beale, "the mad prophet of the airwaves."
B

y the late-1970s, in the wake of Vietnam and Watergate, America’s three major television networks knew one thing to be true: They’d become more profligate than they ever imagined.

After a 20-year trial run that included phasing in color TV, the big three were corporate conglomerates determined to build and defend their influence. And ratings, not whims, would inform their programming choices. About this time, writer Paddy Chayevsky — a Brooklyn Jew who grew up working in chaotic 1950s TV — got mad at the industry’s self-importance and decided to harpoon it He wrote a charcoal-black comedy about a crazy news anchor and tossed it at director Sydney Lumet, who bit.

Circle the wagons all you want around natty “Citizen Kane,” but “Network,” Chayevsky’s meat-eating satire, is still the best media fable of the modern age. It’s the sulfuric acid standard of black comedy.

After which Cheyevsky pulls an ace. He has the simmering Beale, clearly edging toward madness, tell audiences he’ll kill himself on camera after his final broadcast — “You ought to get a hell of a rating out of that.”

The new show’s ratings skyrockets and Beale becomes the self- and company-anointed “Mad prophet of the air waves,” opining on depression, death, taxes, and the Second Coming. He blacks out to end each “news” broadcast. Communications Company of America, the UBS parent, can’t get enough of him. When old school Schumacher protests to UBS president Frank Hackett (Robert Duvall) that the network is manipulating a sick man, he’s booted and replaced by robotic marketing and entertainment guru Diana Christensen (Faye Dunaway).

Lumet works many subplots: Schumacher’s monochromatic affair with Christensen, whose failure to feel intimacy has implications well beyond the relationship; Hackett’s pre-Murdoch, pre-Trump rendition of insider amorality; Beale’s epochal meeting with CCA chief Arthur Jensen (the bit role of a lifetime for Ned Beatty), who tells him: “There are no nations; there are no peoples. There are no Russians. There are no Arabs. There are no Third Worlds. There is no West. There is only one holistic system of systems; one vast, interwoven, interacting, multi-varied, multinational dominion of dollars.”

Contemporary comedy doesn’t get any more informed and prescient than “Network.” It floated the idea — subversive at the time — that celebrity would eventually bypass news and encourage its repackaging. Finch died of a heart attack seven weeks before the 1977 Academy Awards ceremony; he won best actor posthumously.

If Lumet covered all his hyper-realistic bases and mostly stuck to making imagined facts larger than, French director Jean-Jacques Beineix subverted their premises. “Diva,” his 1981 overnight sensation, is a hallucinatory genre-buster that loses itself in itself and comes out the other side bizarrely whole. This is mental, not physical, style, which means the special effects arise from juxtaposition.

Young Paris scooter messenger Jules (Frederic Andrei) worships American opera diva Cynthia Hawkins (Philadelphia-born soprano Wilhelmenia Wiggins Fernandez). Since she refuses to record records, Jules makes a bootleg tape of a performance. But the coveted Hawkins tape gets mixed up with one that would suggest the Paris chief of police is involved in a Mob-run human trafficking ring.

This premise, easy to manipulate, produces a Baroque noir that doubles as a cross-cultural thriller in which Paris is a beautifully jaded city of the mind populated by hucksters and romantics suspended between ennui and passion, thrills and meanness. It’s one of the most visually arresting films of the post-war, at once giddy and vital. Salon’s Andre O’Hehir got it right: “It’s a supremely gorgeous and supremely shallow motion picture, but it believes in art with a capital A. And practically nobody does anymore.” Beineix, 35 when he made the movie, never duplicated this hypnotic roller coaster.