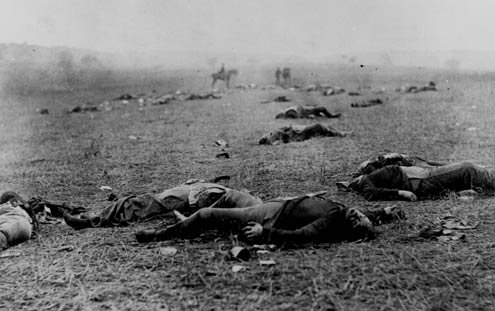 Gettysburg: It has been more than 150 years since North America endured true scorched earth.
R

arely mentioned in the American gun control debate is the absence of a collective national conscience about what weapons can produce, war. After a domestic massacre, what usually prevails is an understandable mishmash of emotional ingredients — grief, outrage, objection to and defense of the constitutionally protected right to bear arms. The role played by historical memory can seem either irrelevant or annoyingly intellectual.

Europe’s seeming immunity from rogue massacres — its few killing sprees have usually been ideologically or racially motivated — is often attributed to stricter legislation regarding the sale and distribution of weapons and ammunition. That’s certainly a component, but it’s not the only one.

Beginning roughly a century ago, Europe was stricken (as was Russia and parts of Asia) with a double-dose of conflict that would eventually leave an estimated 100 million dead and hundreds of cities in cinders. Arguably, the cause of these wars matters less than their first-hand effect on whole populations. The overpowering savagery of World War I left the grief-stricken to vow there would never be another, and yet there was, the second proving even more decimating than the first. Of all the key combatant nations, only the UK was not at least partially occupied by a hostile force (and the UK, after the U.S., has three of the worst gun-related massacres since 1990).

In Europe, the end of World War II brought with it a viscerally convalescent disdain for violence, and a wish that it be officially discontinued. Political enmity and ideological disagreements were not included in this disdain, and they persist. Europe’s citizenry, in communicating the violence they’d endured to their young, took two approaches, each chastening in its own way: recollection of a terrible time associated with weapons and their random use, and a frequent sparseness of detail, which produced considerable curiosity and led some youth to uncover an unspeakable past.

As a result, two generations of parents were linked to a collective memory of guns and unable to separate themselves from the suffering they produced. The lesson was a simple one: despite enlightened teaching, murder was in fact very easy and any means to its end required limiting. While partisans continued telling stories of evening the score against Fascist and Communist enemies (which later evolved into internecine strife, witness the Balkans), violence for its own sake, namely random, gratuitous violence — absurd Newtown-style violence — was intolerable.

Since continental Europe, unlike the United States, lacks sprawl — people live atop others, families become aggregate, their stories instantly collective — fear of the hideousness of unchecked gunplay ran deep. Even in poor, drug-addled urban ghettoes, which Europe developed on par with the U.S., the idea of smalltime warfare contradicted a still-existing ethos that linked guns to more serious social distemper. It wasn’t so much their limited availability — weapons flourish on European black markets — but that handguns, never mind assault rifles, contained the twice-over genes of a harsher probability. Criminality existed, but separate from a wish to tempt fate.

Over the past six decades, the U.S. has developed independently of such thinking. Though America sent soldiers to fight and die on behalf of Europe, the devastated fields and cities to which those soldiers referred in their back-home stories remained far away, estranging listeners in a safe way. Cold War-era advertising further certified the distance between a reassuring “us” and a menacing “them,” with the Atlantic and Pacific oceans seen as buffers. Unchastened by war, some Americans gradually embraced a siege mentality, glorifying increasingly aggressive, frontier-like forms of self-defense.

Postwar American entertainment, which would soon become the hub of all global pop culture, generated an antiseptic version of the European war period that glorified battlefields and weapons (always used for good and for winning). Movies, television, and comic books, already schooled in Colt and Winchester Westerns, peddled the link between weapons and potency in a way that admonished and depleted Europe worked to avoid. In fact, pristine America still knew nothing of the reality of wholesale massacres. The un-invaded UK, mindful of the European genie, was careful to maintain gun restrictions. Even its police remained unarmed.

Again, no such admonishment filtered back to the United States, nor could it. There was no recently scorched earth and constitutional protection commanded the overall view of guns. The U.S. was a winner. Its cities boomed. Its willingness to bear arms had in fact saved Europe.

What collective America did have was a gallery of potential enemies both real and imagined, enemies available for transformation into direct threats by ideologues and faulty minds. Against “them,” all lashing out contained a separate logic. As the prospect of real war receded, real guns re-established their cherished supremacy in the raw fabric of domestic expression. With nothing marred to remember — the eradication of cities, people, and in some cases whole family lineage — and living in a country that put free expression ahead of all else, the unfettered, often threatened self was proud to possess all available bidding, even if warlike, a don’t-tread-on-me position that pro-gun lobbyists still swear by today. There’s no telling if stricter legislation can change such thinking.

War-torn Europe knew what it didn’t wish to see again, and so far has not (though the Balkans provided a reminder). The sealed-off U.S. cannot empathize. Never humbled or chastened, it still thinks big, unconsciously permitting dozens of little massacres to stand in for the larger one it never endured.