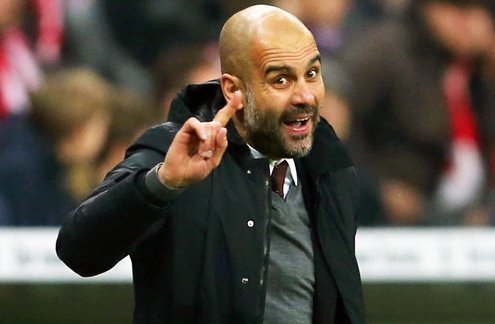 railing 4-2 on aggregate going into the last 45 minutes of his Champions League Round of 16 clash against Juventus, you couldn’t help but think that karma had caught up with Bayern Munich manager Pep Guardiola.

The sleek and urbane Catalan, credited as the visionary behind Barcelona’s mesmerizing close passing style, was appointed boss of the Bavarian giants in 2013 with a difficult mandate: build on the success of the retiring Jupp Heynckes, who had the previous season won the treble of Champions League, German league, and German cup.

After successive seasons of imperious Bundesliga dominance dampened by humiliation in the Champions League semifinals, Pep announced in December 2015 — less than halfway through the current season — that he would leave Bayern at the end of the season to seek a new challenge in the Premier League. In February, after a month of speculation linking him to Manchester City, Manchester United, and Chelsea, it was announced that he’d join Manchester City in the summer.

Even before Guardiola stared down the barrel of yet another Champions League defeat this March — one in which his tactics would once again be questioned — it wasn’t difficult to question the merits of Pep’s move and, especially, it’s timing.

In Bayern Munich and Manchester City, you have two of the world’s five richest clubs according to Forbes. In the middle of the season, with both clubs still very much in contention for domestic and continental honors, came an announcement that threatened to torpedo both campaigns.

Pep’s sudden availability was so momentous — to himself included — that in January, he issued a general apology to Premier League managers whose jobs would be put under pressure by his announcement. Since then, Manchester City’s Premier League campaign has capsized.

The great irony in Manchester City’s downward spiral is that the team is now struggling to hold onto the Premier League’s fourth place, the all-important guarantor of Champions League participation next season. There’s a real risk that Pep’s disruptive announcement could cost him and his future employers — the sheikhs of Abu Dhabi — the trophy they covet most.

Bayern ultimately escaped Juventus by their skin of its teeth, thanks to a very un-Guardiola-esque second half that featured cross after cross. All the while, the wantaway manager gesticulated theatrically in his technical area. Guardiola is no doubt an intense character, but his recent actions make it difficult for some to separate the genius from the disingenuous.

The modern manager is expected to make the best of the squad at his disposal, to uphold and promote the principles of the club, and — when blessed with “his” type of players — to trumpet his own tactical philosophy and brand.

Why would Manchester City be so eager to land Guardiola given his uneven Champions League record at Bayern? It’s no secret that clubs are increasingly brand-oriented, and of all clubs, it’s arguable that Manchester City is striving the most unabashedly to become the Starbucks of global club football. With his distinctive playing philosophy and personal style, Guardiola is part manager, part brand ambassador.

While there’s always been intrigue over managerial firings and hirings, the incredible turbulence of this year’s Premier League — where the traditional big four teams have so far categorically failed to live up to expectation, with knock-on effects throughout Europe — has exposed the folly of the modern manager. While Guardiola has succeeded — albeit clumsily — to rise to the top, the managerial rat race has claimed a host of high profile victims and left a rich wake of comic relief and contradictions.

At Chelsea, Jose Mourinho, fabled psychological motivator, watched his results and job disappear as rumors swirled that his tough love methods had caused a player-led insurrection. It was also believed, understandably, that his public excommunication of a female trainer for incorrectly tending to an injured player rubbed some at the club the wrong way.

The controversy didn’t stop Mourinho from emerging as hot favorite to become Manchester United manager next season. That is, if he is willing to embrace the club’s ethos of promoting youth players within the famous United academy, something he has virtually ignored at his previous clubs.

Mixing in younger players is just about the only thing Louis Van Gaal has done right in two seasons at Manchester United, his shortcomings opening the door for the likes of Mourinho. Known as a disciplinarian, Van Gaal was supposed to be the proven hand whose continental pedigree would restore glory at Old Trafford.

That has not worked. Managers are not miracle drugs. They are high-profile chess pieces whose genius is always a few losses from the latest dispute.