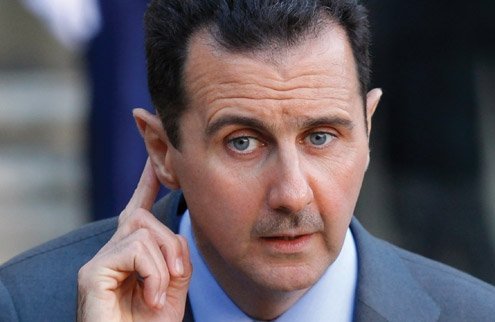 Syrian President Bashar al-Assad enjoys Russian support, but it may not last.
&

#8220;Fear is strengthened by a dread of punishment which is always effective.” Niccolò Machiavelli, “The Prince.”

Instability, the absence of laws and rights, and rampant fear: This was the culture of 15-16th century Florence in which Machiavelli learned the severe lessons he would write about. The characteristics of life presented the perfect storm for those who sought power with a warlord’s sensibility and whose tools were political intrigue and merciless violence. The breed had its infamous roots in such ferocious plunderers as Attila the Hun and Genghis Kahn.

But the philosophy worked less well for Cesare Borgia in 15th-century Italy, and it will ultimately fail for Syria’s Bashar al-Assad.

While Attila the Hun and Genghis Kahn were beholden to no higher powers and carried out their campaigns with impunity, Borgia, a ruthless but capable general and statesman, faced changing circumstances.

He benefited from papal patronage and protection while his father, Alexander VI, was pope. The pope carved out a kingdom for Borgia in northern Italy, which he ruled successfully while his father was alive. But his dependency on the papacy eventually led to his ruin. Once his father died, Cesare’s fortunes were reversed and the new papal powers eliminated him.

Assad, like his father, attempts to rule with an iron fist. But, like Borgia, his reign has strings attached – in this case the puppet master is Russia. Though Russian President Vladimir Putin has yet to turn his back on Assad, the speed with which the Russian ruler pushed Syria into joining the Chemical Weapons Convention (which calls for the destruction of all stockpiles) is an ominous hint of Assad’s future.

In addition to his dependency on his old ally, Assad lives in a time when international laws are in place and human rights are recognized. The United Nations has proved its ability to confer authority to international criminal courts that have brought tyrants to justice.

Under Chapter VII of the UN Charter, the UN Security Council, made up of five permanent members — China, France, Russia, the UK and the US — and 10 non-permanent members, has the power to “…take measures to maintain or restore international peace and security.” These powers have been taken seriously.

In 1993 the Security Council created the International Criminal Tribunal for the former Yugoslavia (ICTY), the first international court for criminal justice since the 1946 International Military Tribunal (IMT), which oversaw the Nuremberg Trials. The UN granted the court jurisdiction over four kinds of crimes committed on the territory of the former Yugoslavia since 1991: grave breaches of the Geneva Conventions, violations of the laws and customs of war, genocide, and crimes against humanity.

Though operating during an ongoing war (and facing intense criticism), the ICTY nonetheless established a legal framework for criminal prosecution, including rules for collecting and presenting evidence and the appointment of defense counsel. The court’s indictments, arrests, trials and convictions were comprehensive, ranging from common soldiers to prime ministers. The convicted are now serving prison sentences.

In 1994 the UN created the International Criminal Tribunal for Rwanda (ICTR) to deal with similarly horrific crimes committed in the African nation.

Both the ICTY and ICTR are ad hoc courts, UN bodies established to deal with crimes committed in the context of specific conflicts. Recognizing the need for a permanent international criminal court, 120 countries adopted the 1998 Rome Statute creating the International Criminal Court (ICC). This independent institution, based in The Hague, has a cooperative relationship with the UN. Since July 2002, it has investigated and prosecuted genocide, crimes against humanity, and war crimes committed by citizens of participating countries, or carried out on their territory.

ICC jurisdiction can be based on referrals from any of the signatory nations or from the UN Security Council itself. The latter has referred conflicts in Libya and Sudan, neither of which signed the agreement. Looking back at the immediate post-World War II period, it was the three major wartime powers — the Britain, the U.S. and the Soviet Union — that agreed on the need to punish those responsible for war crimes.

The existence of these legal structures and precedents cast a dark shadow over Assad’s future.

What has saved him so far has been Russia’s unwillingness to acknowledge the convincing evidence that his regime was behind the August 21 chemical attack near Damascus.

Should such compelling proof come forward, Russia, which despite its own tyrannical history, has long stood up to war criminals, will turn off the lights on Assad. Discussions of amnesty will vanish.

When it comes to chemical weapons, the international community will not and cannot stand for making amnesty into a precedent. The determination to make crimes against humanity legally accountable in a court of law, imperfect as laws may be, has been proved.

With Syria having openly confessed to having chemical weapons Assad, if he’s found guilty of their use, should fear the league of nations, and dread that his own punishment is only a step away, for, as Machiavelli also wrote, “a man who is used to acting in one way … must come to ruin when the times, in changing, no longer are in harmony with his ways.”