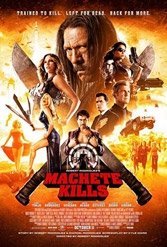 If we could sand down the filmic decade so far into a range of flavors, nostalgia would certainly be one of them. Quentin Tarantino reinvented the West with “Django Unchained,” “The Artist” brought back silent cinema and Marvel gave the 1980s comic scene a new pulse with its “The Avengers” movement. These revamps lifted marginalized concepts and re-packaged them for the masses. Among the more esoteric and visceral to come back around was the action-exploitation movie, a B-flick sub-genre that probably never should have existed and to which Rodriguez brainlessly pays tribute to in “Machete Kills,” a sequel to 2010’s “Machete.”

In the follow-up, American president (Charlie Sheen) calls on mythically macho hero Machete (Danny Trejo) to deal with a schizophrenic Mexican revolutionary named Mendez (Demian Bichir) after he threatens to bomb Washington. But when Machete finds that the one thing stopping the bomb going off is Mendez’s heartbeat, the lunatic action heats up.

Typical of such a genre-piece, Rodriguez creates a carousel of wacky characters out for Machete’s blood. Lady GaGa makes her big-screen debut as shape-shifting La Chameleón. Sofia Vergara plays bloodthirsty whorehouse madam Desdemona and William Sadler does a cracking job as a conniving corrupt Sheriff. This menagerie of cutthroat stock types makes the picture a funfair of mad action and merciless entertainment. But unlike the first “Machete,” it runs out of steam.

It may seem silly to consider a 107-minute runtime as too long, but this is an exception. When there’s no story, esoteric violence is the pull — but 80 minutes suffices for that fix. The film drags horribly, and Rodriguez shows no tact in the pacing or structure. Furthermore, by agreeing to be a cog in Lady GaGa’s “Artpop” album release build-up, one is entitled to wonder if Rodriguez, a prolific cult director, has succumbed to the commercial world he once seemed so hell-bent on fighting.