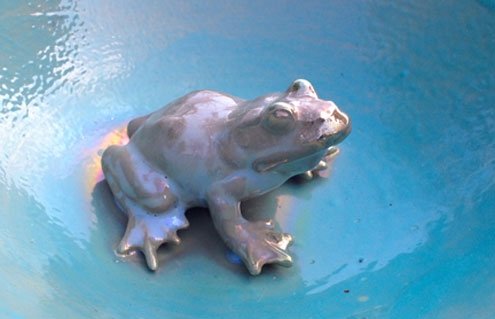 usterware. Lustro. In the mind of a ceramic pot-aholic like myself, the word sounds like pure poetry. I see flowing water and light. I imagine something I want. You’ll probably tell me it’s shopping as therapy, but it’s much more than that. It’s the possession of approachable and affordable art. It’s a piece of history you can actually put in your kitchen.

In the Middle Ages, luster — an iridescent shine added to pottery during an additional firing — was prized. Everybody with any social status wanted tableware with glazed items. But the technique was unknown outside the Islamic world. Europe was eager but baffled.

In the Renaissance, Mastro Giorgio (Giorgio Andreoli) of Gubbio became something of a celebrity for discovering how to create and apply golden and ruby luster to both pottery and porcelain. By burning broom or rosemary branches in his kiln, he changed the oven’s internal pressure. He then fired the combination a second time in a reduction kiln, adding of a fine metal film that oxidized the metals and produced the glaze.

His gold, ruby and carmine work was so valued by Italian nobility that they sent their best tableware to Gubbio for glazing. But by the 17th-century, long after Mastro Giorgio and his brothers had died, the formula was gone and the technique had all but vanished.

Recently, I met potter and artist Maurizio Tittarelli Rubboli, who has worked for 15 years in his family’s pottery museum, the Museo Rubboli. Maurizio is the heir to a family of exceptional potters who moved to Gualdo Tadino near Gubbio in the late 19th-century, where they revived Mastro Giorgio’s local lusterware production.

Maurizio and his family still use ancient techniques to produce lusterware in the original family kiln. Theirs is the only 19th-century pottery oven in Europe. This fall, the Rubboli family factory will officially open open as a museum that includes examples of work by centuries of the best Umbrian lusterware artisans. If you visit, make sure to have Maurizio show you his more whimsical pieces: they’ll take a pottery-lover’s heart away.

Since lustering, or shining, owes half its ancient magic to rosemary, why not make yourself some rosemary potatoes? It might not be quite as exciting as the sheen on pottery but at least you can eat it.

— Place the potatoes in a saucepan with cold water and bring them to a boil. Boil for 8 minutes then drain.

— Drizzle enough olive oil in a large roasting tin to cover the bottom. Add the potatoes and rosemary and bake for 45-50 minutes until crisp and golden.

— Shift the potatoes about every 15 minutes, but no more. Otherwise the edges will not crisp. When done, season well with salt and black pepper before serving.