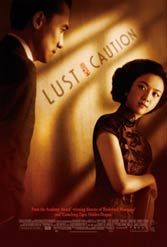 Half-way through director Ang Lee’s “Lust, Caution,” the story of a young Chinese female spy and her sexual entanglement with the man she’s been dispatched to kill, I found myself yearning for gay cowboys. While lust (and caution) abounded in “Brokeback Mountain,” Lee’s latest directorial offering has as much mojo as a cup of tepid oolong tea.

Sure, there’s a lot of sex, but it’s of the desperate, relentless kind and between two people whom you’re not entirely convinced are even attracted to each other. Why does that matter? Because lust is suppose to be the rope that binds unlikely lovers — student spy Wong Chia Chi (Wei Tang) and Japanese collaborator-torturer Yee (Tony Leung Chiu Wai) — who then must each make devastating choices as a result.

The movie takes place in Japanese occupied Hong Kong of the 40s. With exquisite costume design and sets that feel like something out of Cinecittà, there’s a slightly stagy artificiality to it all. But what makes the movie most unconvincing is the characters’ actions: if lust is a bust, caution is thrown to the wind at every turn. Wong passively floats into a student terrorist cell, accepts (likes, is the implication) being raped for the cause, and then makes a final, perplexing decision. After such an extraordinary string of fine films by Ang Lee, this one left me wanting.