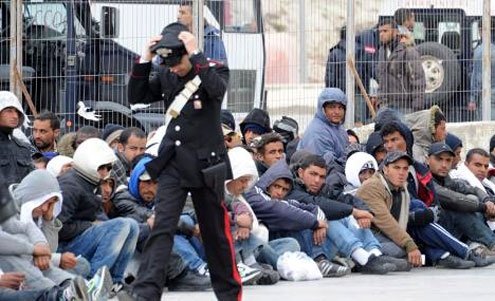 Tunisian refugees on the island of Lampedusa.
T

he coming traffic is from the south. Put aside ruminations on democracy. Curb your inspiration. The coming traffic weds the human to the tectonic. Pieces of the African plate — the people on its Libyan cusp — will soon jab hard at Europe’s already brittle ribs.

Geologists know it’s coming but aren’t trained to involve above with below. They’re not sociologists or anthropologists. Or poets. Yet Africa gnaws at Europe from the Alps down. The 2009 L’Aquila earthquake was Richter’s way of reminding the Mediterranean’s arthritic mountains that they’re on notice. Rifting Africa is hungry to make seismic headway. It’s a continent on the drift.

Add to that humanity’s ample infirmities and the appetite for oil and you have collusion, collision, and potential calamity. The leaders of Germany and Britain insist multiculturalism has failed. If so, fetch some new gauze. The south continues bleeding with current events poised to add to the leakage.

Tunisia’s purging of presidential grotesqueness may have satisfied Twitter but not those portions of the domestic citizenry that fled the aftermath, hoping like 1990s Albanians boat people to make safe landfall in Italy or further north. Some drowned; others were turned away; a fair number fell unclaimed into the clandestine pipeline. No hope of a “better tomorrow” hems in sulking pilgrims. Voluble Egyptians set off for Italy well before Hosni Mubarak’s machinations. Many became pizza chefs. Plenty of Tahrir Square fist-pumpers would hitch a European ride if one were offered.

Coital spasms are often followed by the lackadaisical. Despot-free nations don’t miraculously sprout the infrastructure necessary to jumpstart civility. Albania and much of the Balkans is un ugly grid that the European Union is repulsed by even 20 years after communism. Social reform requires energy similar to the kind that topples autocrats. It also begs loads of cash. Missing such energy and cash, and with no EU to fall back on, putative Arab democrats are forever driven to shortcuts.

Libya is the weakest of North Africa’s malign bones. If coastline doors open, and they’re beginning to, only the fewest of the few will stay on willingly. Which is why southern Europe is rightly wary. Imagine a despotic and arid Mexico bereft of social order with an economy based solely on oil. Would the “liberated” Mexicans of such a nation sit still or migrate toward northern promise? Even democratic Mexico hemorrhages citizens.

Muammar Qaddafi’s detergent gift to Italy was the policing of his borders, often with mercenaries recruited from Africa’s teeming storm drains. Libya erected a sea wall, albeit porous, to cordon off the bucktoothed porch that divides North Africa from Europe. Most non-oil dalliances between Rome and Tripoli were based on curbing human traffic, since Libya had long represented one-horse town passageway between sub-Saharan and North Africa to Europe, mostly through the Balkans, Sicily and Italian Adriatic ports.

Qaddafi promised to use any and all means to keep the human portion of the continental drift under control. Any and all, period. No one should blanche at how veteran despots solve their problems, or how they behave when threatened or besieged. Nor should anyone detach humanitarianism rustling from worries about the maintaining of Libyan oil flows, which Qaddafi also guaranteed.

North America’s weakness for Middle East and North African insurrections is self-congratulatory tenderizer. But not needing to factor in far-away tides of displacement helps out enormously. Would-be democrats are easier to idealize and praise if they’re not busy packing a bag and moving to a better place, your place, a few doors down, which is how Europe appears to the newly disenfranchised.

Of Libya’s six million inhabitants, half are lumped in or around Tripoli, Benghazi, Misurta, Az Zawiyha and Zuara, each one a Mediterranean Sea port in hailing distance of Sicily and the Italian mainland (five years ago, Italian arrivals from Zuara alone totaled more than 20,000, mostly Moroccan, Egyptian and Tunisian).

The number of Libyans ready to clear out will grow as refugees accumulate. The country’s migrant workers, mostly from south Asia, number in the hundreds of thousands. Do the math that bad tidings beget and you soon realize civil war victims don’t resist potential alternatives. They don’t stay in places where the day-to-day is rife with the unkind and the brutal, or memories of it. Any next seems better. They play like the unsettled earth and shove off.

According to geologists, the African plate nibbles at Europe at the rate of 25 millimeters a year. It’s a slow courtship. Hardly even a seduction. But sometimes the pot boils over and the whole land lurches, a reminder of more primal instincts. People power aside, another such lurch is in the offing.