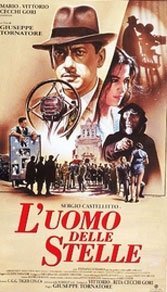 Still nipping at the heels of his own unexpected mega-hit, “Nuovo Cinema Paradiso,” Giuseppe Tornatore turned melancholy on the medium that brought him so much success: Movies.

In this case, “Joe” Morelli (Sergio Castellito) combs the hills of rural Sicily immediately after World War II allegedly in search of “Hollywood” talent. A scam artist who’s pretending to represent “Universalia Studios di Roma,” Joe uses his U.S. Army film camera to make bucks (he charges for auditions) and score women. Problem is, Joe’s a cynic. Hearing dream after dream, he grows increasingly alienated from his scam, and from himself is called by the name Castellito, among the most underrated and best Italian actors of the post-Mastroanni generation. Much as he wants to play happy fraud, he’s can’t, at least not to himself. He falls for Beata (Tiziana Lodata), who tends to the elderly and lets an old man watch her naked for cash. He gets Tiziana to audition for “Gone With the Wind,” Sicilian-style.

What gifts and dooms Tornatore is that you know from the start that the punch is spiked; that no one has a future; that dottore Joe and all he stands for is a lie, a regrettable if enduring Italian theme. Once the narration gets to that sure dead end, the movie stalls. Liars lie, and move on, or vanish. The first 45 minutes, with Castellito at the top of his game, the movie delivers on how beauty, and lies, can inspire a sense of deliverance. After that, actor and director fade to… Sicily.