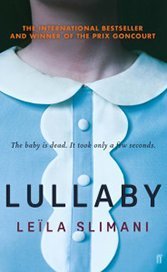 By Leila Slimani, translated from the French by Sam Taylor

In this novel of exquisitely-pitched subversion, Paris power couple, Paul, in the music industry, and Myriam, a committed lawyer, eventually realize that stay-at-home wife duties won’t work for Myriam, who’s left her job but eventually tires of her two darling children (“They’re eating me alive…”) When a new work offer comes her way, it’s nanny-time.

The nanny they pick is highly-recommended Louise, a straight-laced widow who has an uncanny way with kids and soon becomes a household staple.

But the solution is of course the source, if not in the genetic makeup, of all that ensues.

Author Leila Slimani ingeniously tugs at the crooked horizon by creating a Parisian back-drop of unredeemed Dickensian decay, in which cruelty and loneliness attach themselves to all forms of civic belonging. This, then, is Louise’s Paris, and its amoral imprint will come crashing down on her charges.

The question isn’t so much whether Louise is devious, and dreadful, since she’ll ultimately reveal herself to be both, but why? How could parents attentive to the intimate side of the person they hired to care for their children miss the beating of that person’s telltale heart?

Not that hints are lacking. “Nothing rots, nothing expires” when Louise cooks. But if not in the kitchen, where do rot and expiration reside? Is Louise an avatar for Myriam’s own darker side, she who sees her children as “little tyrants?” Or is she a reflection of the inner lining of a city whose romantic side is a lie that conceals the brutal likes of prim but grim Louise?

Slimani’s characterizations are deft throughout, whether her focus is on Paul, Moroccan-born Myriam or elusively constructed Louise. She has clearly lived out this story in an imaginative plotters’ veteran way, filling in just the right number of blanks. She never loses her way or her grip, and the story grows increasingly sinister as a result.

The novel, which won France’s top literary award, the Prix Goncourt, in 2016, comes with its own bit of linguistic mystery. Titled “Chanson Douce” (literally “sweet song”), the French version of songs sung to lull children to sleep, it was rightly titled “lullaby” in Britain. Apparently seeking a broader audience (mothers, no doubt), its U.S. publishers chose the title “The Perfect Nanny,” transforming subtle irony into the kind of caricature short attention spans.