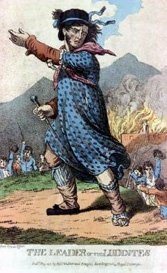 I don’t want people to reach me wherever I am...
P

oking fun, I called him a Luddite. If he detected my condescension he didn’t show it. We sat on a dock overlooking Biscayne Bay in South Florida. An orange sun hung low in a perfect blue sky and royal palms lined the coast. The sweet smell of salt filled the air. We drank Budweiser from brown bottles. Sliver-haired, he wore the same short-sleeved Oxford shirt he’d had on for my last visit, when we arrived in his 1985 Renault Alliance with crank-down windows.

“What’s a Luddite?” he asked

“Let me get you the exact definition,” I said, proudly extracting my BlackBerry from the clip on my bag.

He watched as I stared into the black, palm-sized creation as if into a crystal ball. On the tiny screen were rows of icons each with a different function. With the side scroll wheel, I rolled down to the icon that looked like a tiny earth and clicked on the Internet Browser.

With a bit of whiz and swirl, the screen went white and magically arrived at Google. On the tiny black keyboard in the search box I typed, “Luddite,” then clicked the scroll wheel to “get link.”

“Luddite — Wikipedia, the free encyclopedia: The Luddites were a social movement of British textile artisans in the early nineteenth century who protested-often by destroying mechanized looms…“

Hmm. I didn’t know that, I thought to myself. I love this machine. I clicked on the link for more information and the blue line displayed the data collection process until the full text appeared.

“The Luddites were a social movement of British textile artisans in the early nineteenth century that protested — often by destroying mechanized looms — against the changes produced by the Industrial Revolution, which they felt threatened their livelihood.

“This English historical movement has to be seen in its context of the harsh economic climate due to the Napoleonic Wars; but since then, the term Luddite has been used to describe anyone opposed to technological progress and technological change.”

I smiled with glee and then read it allowed. He looked at me somberly when I finished.

“I’m not opposed to technological progress. I just don’t see the point in machines like that.”

“But I don’t want an email from you. I only use my email at work for work. I don’t even give out my address.”

“I really don’t need my work mail filled with ads for Viagra. My buddy Tom spends the better part of his morning sifting through the emails that are important and the ones that are trash. So it’s simple. I don’t give it out.”

I was miffed. I wanted to send him an email.

“I know!” I protested happily, “I’ll figure out your email! Give me a few minutes and I’ll have your email address and send you a message!”

And with that, I set about pulling up the company where he worked, finding an email link for customer service and using the same name arrangement to decipher his address. As I worked madly to show him how smart and savvy I was with this machine, he looked on with dismay.

“Here it is! — Jklein@summerhall.com.” His jaw dropped.

I went to work writing an email.

“Dear Joe. I hope you are having a good day at work but hope you’ll remember our wonderful time on the coast drinking beer!” Without a second thought, I hit “send.”

“There’s a guy at work,” he began, “the new head honcho. He has one of those things and he’s always typing away on it. In meetings you can’t get him to listen because he’s responding to some beep or buzz. It’s so distracting and impolite. What is so urgent that needs an answer in the middle of our meeting?”

I smiled as he described this man. In New York, this was nearly everyone I knew. At my office, just below the level of the meeting table and out of sight, colleagues wildly type away answering emails and text messages in what’s called “optimizing productivity.” People walk down the halls typing or talking into the earpiece all as part of a days work.

“Maybe I’m just different,” he said. “I want my freedom. I don’t want people to reach me wherever I am. Whatever they need can wait a few hours or a day even. What in the world has become so urgent?”

Don’t I too prize my freedom more than anything? Don’t I often feel the pressure to respond instantly and yet yearn for some true calm? Maybe I was in the presence of a progressive, not a Luddite.

I took a sip of my beer and slipped my Blackberry back into my bag. In the distance the horizon turned melon and violet. Over the bay a lone brown pelican, a stately ancient creature, stretched its heavy wings across the sky. It was magical.

I’m just glad that I looked up in time to notice.