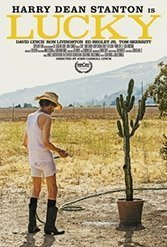 John Carroll Lynch’s thinly disguised ode to veteran American actor Harry Dean Stanton is a film blissfully devoid of pretense. It is a slice-in-the-life of Kentucky-born Lucky (Stanton), a retired Navy man and World War II vet who lives alone on small desert plot outside a tiny and sleepy town (Stanton, like Lucky, was from Kentucky and served as a Navy cook). Stanton’s crusty Lucky never married, has no room for religion, and now, as the end of his days near, mulls the next step in “we come in alone and we go out alone” spirit he ponders devoid of self-pity. Lucky is laconic, kind, fatalistic and, in fact, afraid of dying. He abhors small talk but has no patience for deeper meaning. His friends at the local tavern include Howard (David Lynch, in a break from directing), who spends most of his time bemoaning the loss of his ageless pet tortoise, President Roosevelt, born, Howard reckons, when that president was in office if not before. Lucky’s days are spent trying to solve crossword puzzles and watching game shows he finds silly. He comes to life only in the spirit of the past – once in a remarkable scene with Tom Skerritt, playing a Marine who, like Lucky, served in the Pacific, and again at a child’s birthday party Lucky attends reluctantly, only to steal the show by singing a mournful Mariachi tune in heartbreaking style.

Here then, as his doctor says wryly, is a man who is old and getting older but still very much alive. So what to make, he muses, of the embers that furnish such a life? Little in the end, except to live out life’s small dramas and skirmished while smiling at the silliness that precedes the stage right exit “into blackness,” as Lucky says.

When it comes to paying tribute to an actor’s career, it just doesn’t get any better than this. Stanton died in September 2017 at age 91, less than a year after filming starting. This is a tiny masterpiece created in the literal knick of time, with Stanton given the chance to bid the most rare kind of personal farewells.