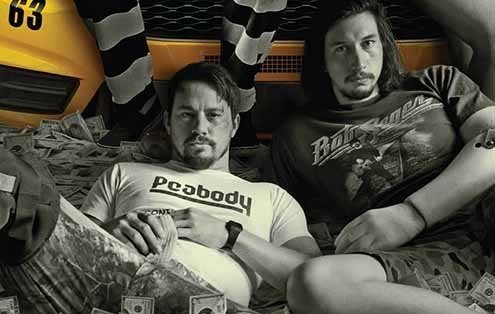 Steven Soderbergh's "Logan Lucky" seems to have been drawn up well before the Donald Trump "uprising."
I

s “Logan Lucky” a caper film or a spoof? A caper film requires some degree of plausibility in the plot. A spoof requires out loud laughter. Director Steven Soderbergh doesn’t give the audience enough of either. Unlike the hilarious “Magic Mike” he directed in 2012 or the witty “Ocean’s Eleven” caper films, “Logan Lucky” falls between genres, and flat.

“Logan Lucky” begins with a reasonable premise. Jimmy Logan (an appealing Channing Tatum) is fired from his job shoring up sinkholes beneath the Charlotte, North Carolina speedway. Understandably upset, he hatches a plan to rob the place. Jimmy makes a cardboard scale model of the track — the sort of thing one might glue together in fifth grade — and uses the model to enlist his brother Clyde in the plan. Clyde (Adam Driver — the epitome of dead-pan) is a one-arm, low-affect bartender at a bar called Duct Tape. Standard “recruitment” scenes follow. Joe Bang (a serviceable but not particularly humorous Daniel Craig) is brought in to blow the safe beneath the speedway, and he insists on bringing along his goofy brothers, Sam Bang and Fish Bang (Brian Gleason and Jack Quaid).

It’s the middle of Act 1 (out of 4), and already the film is in trouble. As his primitive pizza-box model reveals, Jimmy doesn’t have the brains to mastermind a basic heist, let alone one that develops complexity in leaps and bounds. His list of ideas on how to commit a robbery—pinned on a board in his small house — is like those of the plodding protagonists of the 1970s children’s book “Frog and Toad Together.”

Joe Bang is in the local prison, and that means getting him out and back in, and it requires Clyde’s inside help; so Clyde has to do something to get into the prison. The whole prison plan — a caper within a caper — won’t work unless all the inmates are in on it and willing to commit felonies. Joe Bang has some skill with explosives, but he doesn’t use them to open the safe. Sam and Fish, played as country hicks who fancy themselves moral philosophers, contribute nothing to the team.

For the plan to succeed, everyone who might foil the plot — from the prison warden (Dwight Yoakam) to two speedway security workers to Special Agent Sarah Grayson (vacant-faced, clueless Hillary Swank) — and that’s for starters — must be stone dumb, a slow learner, or caught up in an absurd personal fantasy.

A reader or viewer of almost any tale, but especially one with fantastical elements, must suspend rational, calculating faculties and give himself over to the narrative. That’s good —indeed, essential — advice for moviegoers. But there are limits to the mind’s ability to disregard the implausible. With “Logan Lucky,” Soderbergh, who came out of a premature retirement to direct, and writer Rebecca Blunt (a pseudonym; the writer could be Soderbergh) are probing the outer limits of the “willing-suspension-of-disbelief” galaxy.

The film abounds with stars — indie and blockbuster — and subplots. In addition to the many participants in the caper and a side plot of a feuding race car-driver team headed by Max Chilblain (Seth MacFarlane), there’s the family back-story, including the “Logan curse.” Channing is the good dad, disrespected by his acerbic ex-wife, Bobbie Jo Chapman (Katie Holmes). Moody Chapman (David Denman) is the boorish and rich new husband/bad dad, whose own boys are hellions. Riley Keough (Elvis Presley’s granddaughter), playing the Logan sister, Mellie, is the most comedically talented of the bunch, hardly an achievement. Jimmy and Bobbie Joe’s young daughter, Sadie (a winning Farrah Mackenzie) brings sugary sweetness and a cloying applause moment to the film as a modern-day JonBenét Ramsey with little-girl muscles. Her presence channels the values, aspirations, and nostalgia of rural and small town America. Of these portrayals, all but Channing and Keough are caricatures at best and barely elicit a snicker.

“Logan Lucky” was doubtless conceived before the 2016 presidential election, and yet the film engages in that political moment and appears to pander to Donald Trump’s rural, working-class base. Inexplicably, the participants in the heist are all white; the production’s only blacks are prisoners or security guards. The black prisoners are relegated to the background even in the prison scenes. The characters drive across the state lines of West Virginia and North Carolina (both red states) as if they were twin city boundaries, and as if purple state Virginia, which lies between, doesn’t exist. Countless shots of “Welcome to West Virginia,” and John Denver’s prominently-featured anthem to the state, ground the film in the middle-America geography and demography of West Virginia and the NASCAR-dominated Charlotte raceway.

So what went wrong? Soderbergh has said he didn’t understand why the film played well on America’s coasts and not in its heartland, for which it had been crafted. Perhaps it’s because in “Logan Lucky” he doesn’t seem to be laughing with middle America but at it.