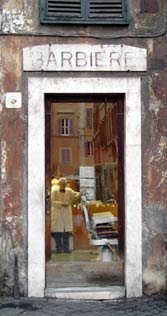 arly into an article about upheaval in the American book industry comes this line: “The metabolism of the culture has sped up in the digital age.”

Then this one: “Fueled by a convergence of spectacularly dramatic news events, publishers are hitting the fast-forward button.”

In case you’re slow: “The unprecedented pileup of historic news is motivating a broader industry speedup.”

Producing a book in a week (or less) is known as “extreme publishing” (like extreme fighting, extreme cooking, extreme dating, extreme talking, not to mention extreme distraction.)

The next article I read covers the recent economic summit in London.

The French president speaks first: “When it comes to historic moments, you can’t circumvent them.” Then the American one: “By any measure the London summit was historic.”

There are days when hyperbole frazzles common sense. Verbiage puts a haircut on hold. A whole afternoon vanishes.

But today’s Monday, my lucky day. Barbers take Monday off in Italy, which is extreme but not historic. Unless history also includes what doesn’t happen (imagine “When it comes to barberless days, you can’t circumvent them.”)

My barber is an elegant man named Franco. He spends most of Monday at home with his wife pondering his next summer trip. He has been to Miami, Me-ammy, he calls it (he was forced to leave prematurely because of the “attack” of a “woman” hurricane, as he called it).

When at the Grand Canyon he looked for signs of aliens, disappointed to learn that they’d apparently landed instead in Nevada, and in long-ago 1947 (“They probably have children by now.”) He went to Australia a few years ago and met “regional men,” which is what he calls aborigines.

Franco has cut my hair for 19 years. “Is it true that on the Internet you can get things faster and decide what you want to do next?” he asks me.

I want to reply that an unprecedented pileup of historic news fueled by a convergence of spectacular events has erased free will. What comes next picks you, not the other way around.

But I can’t. The shop is closed.

Meanwhile, my favorite restaurant is closed on Wednesday (and for three weeks in August). It’s true that some restaurants no longer shut down once week, as Catholic-influence state law required until the mid-1980s. Yet most still take a long break in August and a shorter one at New Year’s.

“A little rest is always needed,” my favorite waiter would tell me each summer in late July, folding his hands and sounding like a contrite priest. He put this philosophy into two chipper Italian words, ci vuole, the sum of another two in English: I’m tired.

It’s a lot to presume on the metabolism of a culture, let alone on its human drones, that it always kowtow to the market place and its weapons of mass communication. Culture needs breathers and downtime, an escape from history’s ascending effusions. Even greed gets tired.

Maybe they’re unaware of the speedup or unwilling to converge. Or maybe cultural convergence, like drama, differs country-to-country. Italians, for example, don’t take the speedy life seriously, except in cars. If they did barbershops would work on Mondays and grocery stores would stay open until midnight or beyond. There are no 24-hour convenience stores in Rome.

Or, as Franco says, summing up the state of the world, “You can’t get a haircut on the Internet.” His son (if I understand correctly) is an IT technician, which Franco pronounces “ET,” as in “come home.” He’s proud of his “modern” son, though he’s not sure about the substance of what makes him proud. He doesn’t own a computer.

Despite the alleged proliferation of ET-wise progeny Rome pharmacies (mostly run by under-40 pharmacists) stay closed on Sunday (some on Saturday, too), and only a few are open all night. For that you need a list (which you’ll find window panes of the closed ones). The Web won’t really help, not reliably.

Maybe Rome’s lesson, at least in part, is about circumvention. Maybe the West needs a prominent capital capable of playing the extreme to a draw. Maybe Monday’s absent barbers are intended to tell a world ruled by high blood-pressure and the digital post-it self that some fast-forward buttons are not meant to be pressed, décor on an alien spacecraft whose Trojan Horse form no one can see for the colored lights.