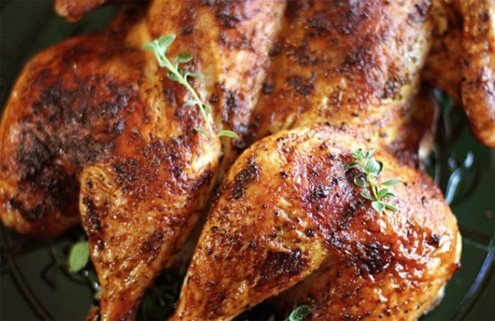 uring the 1938 Giro d’Italia bicycle race, an Italian journalist concocted a wonderful and mouthwatering story. While riding through Tuscany, two hungry competitors got so far ahead of the main pack that they hatched a little plan in keeping with local culinary traditions.

They parked their bikes, absconded to a nearby cave, lit up a fire, and cooked pollo alla diavola, devil’s chicken. They managed to grill and eat their sumptuous little dish before the rest of the riders got there. Newspapers in the nearby Tuscan city of Pistoia ate up the story, since that stage of the race wasn’t particularly interesting.

How did the riders come upon a chicken? No one ever filled in that blank, though the Italian countryside is filled with them.

Legends aside, deviled or spatchcocked chicken — that is, open along the middle, flattened and pan-roasted with spices — is cheap, quick and ridiculously tasty. It’s also very popular.

Tuscans (including bored and hungry bike riders) roast theirs on a spit, but the recipe that follows is more typical of the pan-frying in Rome. As for the chicken’s satanic roots, some point to the recipe. Having to cook the bird over a high flame gives it a Lucifer’s kitchen dimension. Others more sensibly suggest the moniker comes from the inclusion of peperoncino, or chili spice.

Whatever the naming roots, pollo alla diavola is a classic Italian dish, and idea if your pantry is nearly empty. The recipe is low on ingredients but high on technique. It’s also perfect in winter when warmth still seems weeks away.