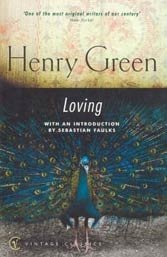 In his most acclaimed work, English writer Henry Green (1905-1973) supplies intimate fulsome gossip that seems lifted from a 300-year-old farmer’s market scene, or from a 18th-century comedy of manners, but absent the dignifying protective filters. It’s the conversational story of British servants “exiled” on an Irish estate, Kinalty Castle, during World War II. At the center of the action is conniving if dyspeptic worrywart Charley Raunce, the butler by default after his superior Eldon dies. “We’re liven’ under a shadow these days,” he says, and the extent of the shadow is soon evident. Around him is a buzzing but demoralized staff concerned about “Jerry set to cross over” and the bombings at home (things are bad even in despised Ireland, with the grounds bereft of electricity and low on food).

The lady of the house is “silly old cow” widow Mrs. Tennant, a fussy elitist who calls all butlers Arthur and keeps messy peacocks in the garden to give the place color. Her daughter-in-law Violet, mother of two, is having an affair with a Captain Dermot that only the hired help knows about, leading to all manner of speculation and titter.

Green’s great gift is selfless dedication to dialogue, which he uses to familiarize the reader with his key players, most notably 39-year-old Raunce and the still-teen apple of his eye, Edith, who cavorts adolescently with her fellow maid Kate. It’s a backhanded portrait of end-of-empire (and era) England funneled through the big and small disenchantments of a quarreling and disingenuous servants, making for a narrative with a Shakespearean lilt.

Easily duped Mrs. Tennant scoffs at the low quality of the help, while the help responds by secretly mocking her and hatching petty schemes, one focused around an heirloom ring. The loving to which Green unironically refers are the ties binding these displaced souls (“Well, we’re all one family in this place,” says Charley). He confides their chit-chat with a comic tenderness that wholly ignore the existence of the 20th century, dispensing with all things modern in favor of the virtue and vice built into daily exchanges, evidencing different kind of war from the one in Europe, but an ongoing battle nonetheless.

“Life,” Green once said, “is one discrepancy after another,” and at Kinalty Castle — which he calls “the most celebrated eighteenth-century folly in Eerie that had still to be burned down” — he makes them a wildly noisy nest.