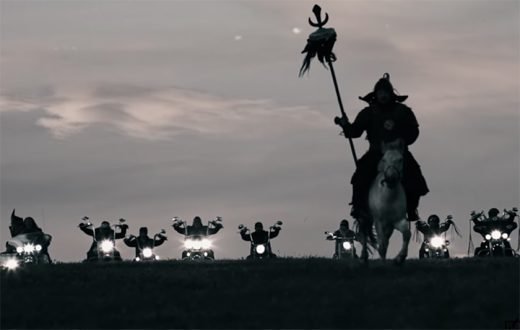 The HU's memorable videos, which combine the allure of the steppes with metal themes, have attracted millions of Youtube visitors.
A

few months ago, I was lazily scrolling through Facebook when I ran into a video with the caption “Mongolian metal is awesome.” Curious to know more, I clicked on it. Within a minute, I found myself bewitched by The HU, a heavy metal band that successfully combines Metallica-style music with traditional Mongolian instruments and throat singing, an ancient technique in which the singer manipulates resonance — which I’ll get into later. The result is unique and mesmerizing.

The four-man band is composed of veteran Mongolian musicians.

Gala is the lead throat singer and plays the Mongolian morin khuur or horsehead fiddle. Jaya sings and adds flute and mouth harp. Enkush is the lead morin khuur player and also sings. Temka’s instrument is the topshur, a two-stringed lute.

Though “HU” alone has no meaning in modern Mongolian, the obvious root word (evident also in English) is “human.” The HU was formed in 2016, but it wasn’t until autumn 2018 that two singles, “Wolf Totem” and “Yuve yuve yu,” appeared on Youtube. At once slick and exotic, both swiftly attracted wide audiences.

By early 2019, The HU’s releases had picked up more than 20 million views as well as critical applause. The success led to a European tour in June and July.

I saw them play in London in June, and their performance exceeded all expectations.

While the band’s sound and instruments are breathtaking — and in defiance of known cultural stereotypes — it is the resonant throat singing that sets them apart.

The key to The HU’s success is how the band combines ancient Khoomei with 20th-century heavy metal, creating an improbable but highly effective musical blend.

It also led me to try to better understand its origins. In the Mongolian language, the art of throat singing is known as Khoomei. The technique calls on the singer to adjust air as it rises from his lungs, through his vocal cords, and finally to his lips, emphasizing specific harmonic structures and pitch. It is a complex and remarkable vocal exercise that permits a singer to emit more than one pitch at the same time, making it seem — and it’s mind-boggling — that one vocal breath is producing several sounds at once.

The method, not surprisingly, requires years to master. To the untrained ear, the result can sound like a magic trick.

In 2009, Khoomei was added to UNESCO’s list of the “Intangible Cultural Heritage of Humanity.” Khoomei descends from Mongolia’s tradition of pastoral and animistic religions. As ethnomusicologist Theodore Levin explains in his 2007 book “When Rivers and Mountains Sing,” local animistic religions related natural elements not only based on their shape, but also on their sounds. Khoomei tends to imitate the sounds and melodies of nature itself. Vast landscapes, such as Mongolia’s, provide ideal circumstances for such sounds to be heard and registered. Distance then provides a sense of resonance.

Several traditional Mongolian throat singers have received acclaim in the past: Batzorig Vaanchig and the group Alash Ensemble, for example. Throat singing was long considered a traditionally male genre, with taboos against women performing it, including a belief that the male relatives of the female singer would fall ill as a result of her performance. But that is changing. Female bands such as Tyva Kyzy have taken up the style.

Yet the true key to The HU’s success is how the band combines ancient Khoomei with 20th-century heavy metal, creating an improbable but highly effective musical blend.

The band recently returned to Mongolia after 23 concerts in 12 European countries. Their first album, “The Gereg,” scheduled for release by the end of 2019, is named after a diplomatic document used as a passport of sorts during the Mongol empire under Genghis Khan.