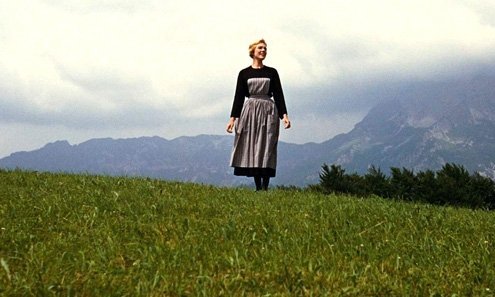 No scary bad guys in "The Sound of Music."
P

arenting gives us an opportunity to relive our childhood, or at least to remember it. It allows us to stroll down memory lane. As my boys experience first and second grade, old memories come flooding back fast and hard. I have flashbacks to tooth fairy visits and spelling tests, Halloween costumes and Christmas wish lists.

Some mornings my six-year-old conjures up what I like to call the “Jedi-mind trick-déjà vu.” As his feet hit the floor and he rubs the sleep out of his big brown eyes, he opens his mouth to speak. Instinctively, I know what’s coming. I know it because it’s what I once said.

“I know, you hate Mondays and you hate waking up,” I tell him, and he nods. I want to add, “The opposite of waking up is death so shut up and eat your French toast,” but instead I offer him and hug and a plate. Moments like these make me feel powerfully intuitive. They also make me feel like I’m six again.

My kids are movie buffs. So was I. I fondly remember waiting for our annual spring viewing of “The Sound of Music,” to me far superior to “Chitty Chitty Bang” or the “Wizard of Oz.” It was better because there was no scary bad guy — unless you counted Hitler, but he never appeared on screen dancing. The Child Catcher and the Wicked Witch of the West scared the pants off of me. I’d excuse myself and go to bed when they appeared. Overly sensitive, I was petrified of bad guys. I could only handle the first acts of “Chitty” and “Oz.”

No surprise, my boys are the same way. They’ve cried though “Nemo,” the “Toy Story” trilogy and even “Big Hero Six.” And each time they start crying I tell them it’s all right to feel a film. “The writer and director wanted you to laugh and cry. It means they did a really good job and that it’s a really good story.” That, I know, is what the small me would have wanted to hear.

A few weeks ago we went to see Disney’s “Inside Out” in English. Like the olden days, we got our tickets and bought our popcorn. My eight-year-old laughed at all the right parts and got teary-eyed too. My six-year-old squirmed, talked and laughed, ruining the movie for me. I was shocked. This was the same kid who’d twice sat through the musical fantasy “Into the Woods” without a peep. Afterwards, I scolded him. His behavior surprised and baffled me.

But when we got home he started sobbing. He bawled as if someone had stolen his Skylanders (never underestimate the power of a video game), or canceled Christmas, or killed his mother, namely me. On and on went the blubbering, the wailing and the screaming.

“I loved the elephant!” he hiccupped (spoiler alert).

Now I understood. We were deep into the details of the movie, which revolves around a girl named Riley (and includes a pink elephant called Bing Bong).

“I know sweetie,” I consoled him, “but he sacrificed himself so Riley could be happy, because he loved her so much.”

“It’s a nice thing to do,” I continued. “I would sacrifice myself for you or your brother.”

Stupid, stupid me, since that last remark sent him in to convulsions. “I don’t want you to sacrifice yourself because then you’d be dead like the elephant. I loved that elephant!”

I changed tactics. “The elephant wasn’t real,” I said. “It was only in Riley’s imagination. She just forgot him.” He continued sobbing in my arms until he fell asleep.

The boy I thought I knew so well had thrown me for a loop. It seemed “Inside Out” had turned my son upside down and that I’d need to keep the school psychologist on speed dial the next day.

But when he rubbed the sleep out of his big brown eyes the next morning, something else came out. “Mom,” he told me, “I really felt that film. The writer and director wanted me to laugh and cry. It means they did a really good job. That it’s a really good story.” Then came more tears — along with wanting to know when the movie would be out on iTunes, so we could buy it.

That day came today. We bought it. We watched it. We laughed. We cried. I learned that my six-year-old is the right amount of sensitive, and is also a damn fine film critic.