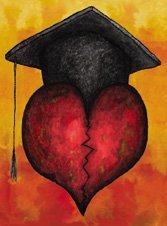 always knew that I would fall in love with a professor. Since learning was my real love, whoever imparted it to my liking was like a delicious after-thought. “Your true orgasm is your work,” my ex smirked in the final months of our relationship. Doubtful, I thought. But strange and sinful? I was led to believe both, lessons imparted from an erudite mind.

My first crush was on my fifth-grade teacher. Mr. Skay was young and handsome, a rebellious soul in a private Catholic school, who encouraged us to think and to feel. He got me to laugh and told me that I could write. Then there was Joshua, my summer poetry teacher at 15, a weeklong flame that I held in my heart throughout the dimming experience of high school when I shut down passionate words to get ahead. And then Stimilli, my Italian thesis advisor in college, a poet and a brilliant scholar of philosophy and comparative literature, who left me alone as I discovered where he came from in the words of Saba and Pasolini.

All of those crushes, had they bothered to become relationships, surely would have ended the moment they began. It was the idea, and the ideas they gave me, that I was really after.

Then I met the professor whom I was to love, my life’s first love. Maybe the relationship only lasted, albeit longer than it should have, because I’d met him not as a professor, but as a marathon runner. We were waiting for medical exams at Rome’s La Sapienza University gym, and Antonio told me he was a professor of English literature. A few months later, we were sharing everything from a love of language to long runs and mostly, each other.

I had been forewarned about these relationships. My childhood piano teacher (and only true mentor) lived with the head of the university’s piano department, an eccentric man 30 years her senior. When she finally had a nervous breakdown my senior year and left him for good, we were all delighted. “Those relationships never work out, Kristine,” my mother reminded me two years into my own affair, after having shown her a Harper’s article written by a young scholar singing the virtues of apprentice-master love affairs. “But Socrates bedded many of his students,” I thought. “Nothing could be more natural, or more fulfilling.”

For a time. He showed me Italy; and his soul, before absorbing my own. He taught me to cry at movies, to take “sei semplice” as a compliment. He showed me the difficult and tenuous grasp of living inside another’s culture. But as this unfolded so naturally, something horrific grew out of it: My own love of words — and thought — lost sight of itself and became morphed into his own doctrine, learned and convinced, at turns wise and cynical.

One of the first days of an internship at an esteemed news agency, I suffered a slight setback in what would be a string of disappointing, though eye-opening experiences in a profession my heart and ideals longed to make my own. “Don’t worry,” he said to the pensive student he’d taken to look at ruins. “Professional life is full of disappointment and deceit.”

“Yes, well probably,” she pondered, then looking away, “but I haven’t even begun. And I only want…”

“Instead look at the 2,000 years of history,” he interrupted, drawing her in.

“Of course.” She snapped to, donning an attractive mask that rested comfortably over those inquiring eyes.

But the mask, of its own accord, began cracking into bits and pieces.

“Women’s creativity is primarily expressed through the one thing that men cannot experience: childbirth,” he once said. “Perhaps” …thought the student whose mind wandered out the window. But then, “Their contribution to literature and the arts has been marginal,” he continued.

The student’s hand shot up occasionally, breaking through her shyness: “It surprises me to hear that from an English literature professor. What about Jane Austin, George Eliot?” He did have Virginia Woolf on his bookshelf, but she was the only female author who merited a place in his literary repertoire.

“Beh…” was his response.

Onto Ethics. “The American media ignore the death penalty,” he quipped.

“But the Chicago Tribune did an investigative series on this. And it was my peers at Northwestern whose reporting convinced the governor of Illinois, a conservative and supporter of the death penalty, to pass a moratorium,” the student offered.

There is a simple and lovely Italian phrase that I once heard and never forgot: “Una parte di me se ne va…” The secretary at my first job muttered it, distraught, after we’d just found out that her colleague, the other secretary, had been brutally robbed of her young life by crashing into a wall on her motorino. Four years later I would mutter the phrase to myself as I left him, and his school, to begin my own adult life.

When I left, I knew precious little about what I thought about most things in the great wide world. But I’d come to learn one thing: It is a sin to hold children back — especially those whose minds wander out the window, those who rarely raise their hands above their thoughtful brows. It is they who most insist upon knowing and doing on their own, or their minds damn them into becoming the eternal class cut-up.

I recall the last time he drove me home with all my things. “Can I call you, sometimes?” I asked, sobbing, beside myself with love’s first sorrowful lesson, messier than anything had ever been at real school. “No. Best not to,” he’d said, tears in his eyes, understanding very well what he regretted, what he dared not have ever imparted. He’d taught her how to run, unwittingly, from himself. But alas, the teacher to his advancing student: “Be good.”

I’d recognized that feeling, somehow bittersweet: It was the little girl saying goodbye to her grandmother and aunt after the summer. Those who often felt dearer to her than her own mother; they’d taught her how to tie her shoes and braid her hair, then gave her back to the woman who’d given her life.

It is that peaceful parting that I prefer to remember. What happened afterwards — the unfortunate months of going back and forth — was the little girl who would have jumped out of her parents car that sped away from the summer to run in circles round the block: before she was to catch herself and fall back into the car that took her home again, for the start of the new school year.