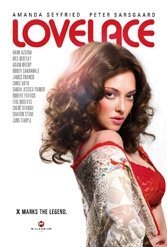 Seyfried’s eyes are bigger than her performance, but in fairness she’s not so much miscast as mismanaged. The largely linear narrative is disrupted by flashbacks, all of which transform a potentially powerful movie into little more than a kind of cinematic Wikipedia entry.

Feature cinema and documentary-making are different forms, but Epstein and Friedman apparently got only got half that memo. The result is a tactless, diluted, dither through a person’s life. Some may say a story speaks for itself, but not when there’s a gag down its throat.