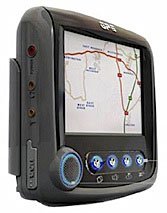 hen my erstwhile husband and I ordered a new car, he wanted the satellite navigation system — GPS. I considered it a useless male gadget, whose function was adequately covered by my impressive, if old-fashioned, map-reading skills. He ordered it anyway. By the time the new car arrived, we had separated; he happy with the new one, and I with the low-tech oldie.

But seeing a GPS at work on a London trip started a conversion process completed by my separation. For driving alone with two unhelpful children, I now needed a navigator, electronic or not. A GPS would keep me from reading the atlas perched on the wheel or hesitating, indecisive and myopic, at autostrada exits. With the GPS’ forewarning, I could exit less abruptly, safe from the wrath of tailgating Italian drivers.

The GPS would eliminate the gap between the imaginative typography of Italian atlases and the dubious reality of sign-posting. Italians navigate by local hierarchies of destinations the locals already know. Ask for directions and they tell you to take the road for Villabassa or the Strada dei Colli. If you knew which they were, would you be asking?

In America, roads are numbered for the convenience of newcomers. The numbers are on both signs and maps. While numbers may seem un-poetic, I know no Italian song that rivals “Route 66” or “Highway 61.”

The GPS in the new car I eventually got is all I hoped for and more. While I have mastered Milan’s topography on a bicycle, the GPS spares me the mental effort of finding automotive alternatives to prohibited bus/taxi lanes or going the wrong way on one-way streets. If I hit the cutesy icon for “Home,” it will take me there. This option is like turning a tired horse toward the stable or saying “Home, James” to a chauffeur.

My son discovered the GPS’ best feature on the way to rugby, when he sampled its languages, including several varieties of English: “English UK, English (U.S., female), English (U.S., male).” I did not need Henry Higgins to tell me the U.S.-male speaker was no American, though Higgins could easily have identified the speaker’s native Shire or London borough. GPS-man’s only effort at sounding American was a pathetic simulation of a Yankee “r.” On arriving at rugby, I expected him to remind my son to take his rugby “kit” from the “boot.”

But gratitude became love because the pseudo-American GPS voice reminded me of an English man (I’ll call him George) I have a hopeless schoolgirl crush on. Like many vices, what began as amusement became a disturbing habit. I obsessively select “Home,” greedy for the foolish reverie the GPS ignites. During the rugby run, I imagine myself driving George somewhere more enticing than Milan’s periferia. Like addicts who experiment with ever-more lethal drug cocktails, I heighten my morbid state with sappy splashes of Norah Jones or Frank Sinatra.

Language is the heart of my infatuations with George and his phantom. I have dialogues with Italians that are infinitely more complex and intimate than the impoverished exchange of humorous emails that is the sum of my relationship with George. But despite their better quality, my Italian conversations never generate the same complicity in tone and phrasing as my desultory correspondence with George.

Any scientist wondering if humans have an innate “deep” grammar should ask me. I know it exists in the WASP English of my childhood and in George’s often banal communiqués. “Mother tongue” is no idle phrase. The subtle assumptions and sfumature behind our dialogue strike ancestral chords in me that Italian and most other varieties of English never do.

In sober moments, I remind myself that the deep connection I find in superficial communication is illusory. But that is the whole point. In the car, my unsatisfied relationship with the unattainable George is exactly and exclusively what I want, when I want.

Last week I received a Chinese horoscope email. It instructed me to number a paper, as for a school quiz. Then it asked me 10 questions; names of people I know of the opposite sex, of the same sex, the titles of songs, etc. I was not to peek at upcoming questions and had to write the first answer that came to mind. At the end, it interpreted my answers. Question three — male name — was the person I’m in love with. I had written George. Answer number seven was the song title corresponding to George: The Rolling Stones’ “Satisfaction.”

But I can get some. I just get in my car and tell the GPS where I want to go.