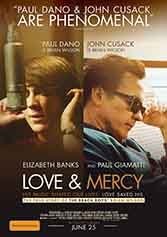 Bill Pohlad’s eminently decent biopic about the life and times of The Beach Boys’ Brian Wilson takes the toughest possible route in attempting to portray the evolution of an unstable but deliciously gifted musical mind. The film covers two Wilson’s, the 1960s California boy mostly out of synch with his band-mates but tuned into the remarkable sounds in his head (Paul Dano), and, more significantly, the forty-something Wilson (John Cusack) soon after his brother’s 1983 death, by then diagnosed as paranoid-schizophrenic and under the obsessively nutty and manipulative care of quack psychotherapist Eugene Landy (a weirdly effective Paul Giamatti).

It is Cusack’s well-played older Wilson who meets Melinda (Elizabeth Banks) in what Pohlad uses as a sentimental trigger to bring troubled the Wilson whole together. Pohlad seems less interested in music and more in mental harmonies and their disruption, as if trying to create a blueprint for what makes melancholy genius tick. “Even the happy songs are sad,” a skeptical Mike Love complains at one point. But the young Brian can’t stop composing them, in defiance of a fired daddy–manager whose love and respect he still wants to win but can’t.

All this makes for an interesting if not entirely convincing story, since neither youthful nor older Brian has the screen time necessary to fully anchor his character. There’s no denying Brian Wilson his place among pop-rock’s legends. There’s also no denying Pohald’s poignantly noble intentions on behalf of the boy who heard voices (the genesis of “Good Vibations,” Brian’s “pocket symphony to God,” is lovingly reconstructed). Rarely, however, is the Wilson riddle full enough to fathom, leaving fans to revel in their appreciation of him and non-fans to wonder at all the fuss.