Love in the time of the coronavirus 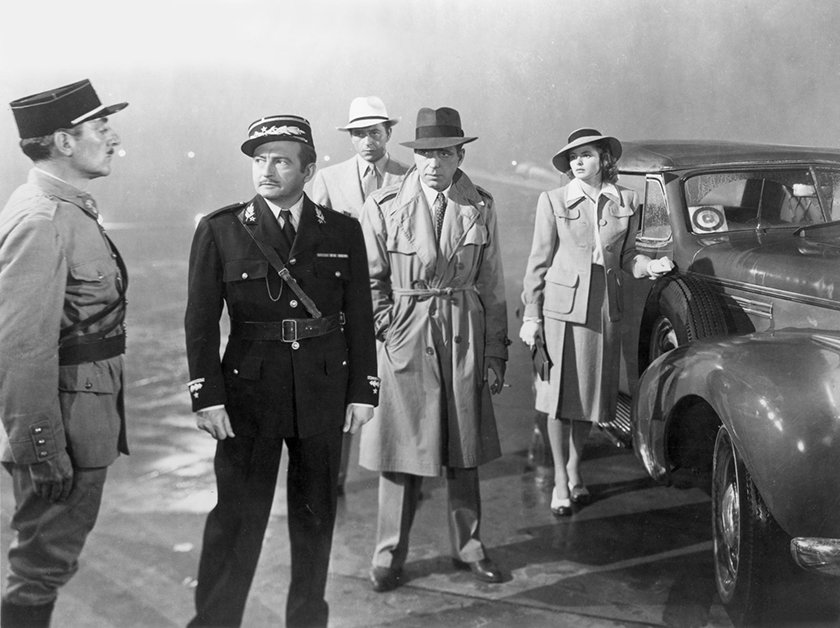 Humphrey Bogart and Ingrid Bergman in 1942's "Casablannca": No doubt about it, this is war…
I

was supposed to be vacationing in Italy earlier this month, spending Holy Week in Rome and visiting friends who live there. The coronavirus canceled those plans.

Instead I’m sitting at home in Tallahassee, Florida, watching an old James Bond movie with my cat, Spatz. This kind of scene has become normal in recent weeks.

Spatz is comfortably ensconced on a pile of “New Yorker” magazines scattered across my coffee table. The weather outside today is dreary and drizzly, so no chance either of us is going outside.

I am finishing up my first of three weeks of furlough to be staggered over the next three months, as ordered by my news corporation in an attempt to right its corporate ship after the virus caused advertising revenues to plummet and stock prices to crash.

Watching old 007 movies gives me a virtual window on a world through which I can no longer travel safely.

I am isolated from my coworkers and friends, practicing social distancing, occasionally going out for groceries, wearing a home-made cloth face mask and rubber gloves. Watching old 007 movies gives me a virtual window on a world through which I can no longer travel safely, with its dazzling cinematography of European cities, and the Caribbean, and Japan, and further still.

A lot has changed in the month since my last column. The United States has overtaken all the other nations in the number of people with coronavirus, approaching a million and already surpassing the combined totals of Italy, Spain, Germany, and France.

Despite some signs of flattening, the crisis in Europe goes on unabated with high daily death tolls still reported every day in Italy. A few countries, including Austria, Denmark, and Sweden are digging out, but they remain in the minority.

The U.S. mortality rate has caught up, with more than 40,000 dead. New York is ground zero for the virus outbreak in North America, but South Florida has become an equally alarming hot spot.

And we haven’t even hit our peak.

Amid this gloom, however, a bit of sunshine has returned to my life. Companionship has crept into my solitude, brightening the dark corners, like the first crocus to bloom on a barren early spring meadow. A woman I used to date has come back into my life and we are trying to see if we can get it right this time.

Funny how timing plays a role in our lives. I was planning to use my furlough to travel to another state and help a friend move, but after the stay-at-home order was issued and Florida’s governor set up checkpoints at major interstate entries throughout the whole state, I decided it was wiser to stay home — much to my friend’s disappointment.

The last thing I wanted was to be forced to quarantine for 14 days upon returning to Florida if anyone found out that I’d left the state.

Instead, I stayed home. I focused on my home life, getting in enough hiking and biking to stay healthy — soak up enough Vitamin D and sunlight to maintain a good mental state.

And then she called. We chatted. She’d had a row with the guy she’d been seeing for the past few months and wanted to get together. Of course, I wanted to see her again. Things between us had ended badly, abruptly and without resolution back in August. Maybe we could talk.

We did more than talk. We laughed. We cried. We reminisced over the good times, tried to work out the horrible times, why we bickered so much when we clearly liked each other so much, why we fought when on paper we looked perfect for each other.

She came over to my place. And with some hesitation, we gently bridged the six-foot social distancing gap recommended by the Centers for Disease Control and Prevention.

She felt guilty for being in my arms. But this is wartime, she said, so it’s all right, isn’t it?

It’s all right, I told her. We’re in this together, whatever this is.

Still, she went home feeling uneasy. The next day we took a long hike on the same trail that we had taken on our second date two years earlier. We talked about that first hike, the fun we had. We stopped and looked at a wood stork wading in the reeds near the shore. We admired a hawk flying overhead and alighting in a tree.

We carried on our faire de guerre for days, each day hashing out our relationship, going over the things that made it special, the things that drove us apart, wondering if this was rash and foolish and even workable.

With some hesitation, we gently bridged the six-foot social distancing gap into each other’s arms

Our relationship had been at times remarkable, but also perplexing, difficult, and ultimately unworkable. How many times had we broken up and gotten back together? What chance did we have?

Especially in light of the other man.

“What am I going to do about him” was a nightly refrain. At first she was bowled over by the attentiveness, but that soon turned into a pushiness and insinuation into parts of her life she didn’t want him in. When I asked if she wanted to see him anymore, she said no.

She wanted to end it. But she didn’t know how.

It wasn’t “Casablanca.” We hadn’t been separated on the day the Nazis marched into Paris. She didn’t wear blue. Sam didn’t play “As Time Goes By.” This was no Rick-Ilsa-Victor love triangle, but it was a mess and she wanted to do the right thing.

Maybe we needed to give each other some space until she could talk to him and end things properly. Maybe not. In a few days I’ll go back to the strenuous, stressful grind of 10-12 hour days reporting the pandemic’s progress.

But in these bleak days it’s been nice having someone around.

This is war, dammit. A war against an invisible danger.

And we need all the allies we can find, wherever we can find them. We’re human, and maybe the biggest human need in a time of crisis is someone by your side to share the struggle, someone to talk to and hold, someone to console you.