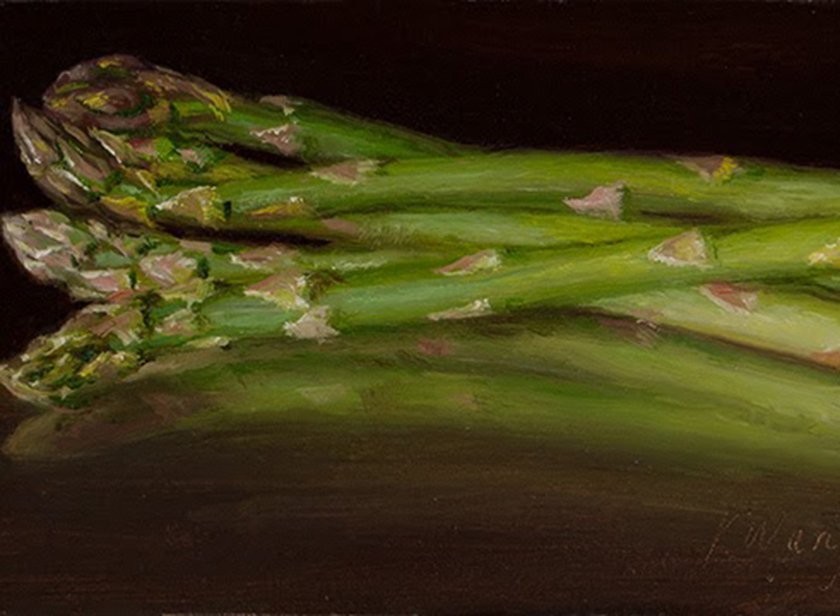 Once in a blue moon asparagus leads to love.
I

t was Valentine’s Day not so long ago. I was married on Valentine’s Day. Easy to remember, right? But it was an Easter gathering that changed everything.

And love’s beginning might have faltered were it not for a handsome man with an open mind and more on it than whether the asparagus was cooked correctly or not.

A luncheon of close friends, a new slinky dress sewn that morning with the determination to change my life, and a plate of marinated asparagus were the elements of destiny; I had gone to the lunch party alone, leaving a marriage and determined to begin anew, and I was late.

Everyone was outside. As I passed by the French doors on my way to the kitchen, where I was headed to prepare my offering, I could see that some of the guests were strangers to me. One of them came into the kitchen and placed his hand gently on my right cheek. Not the one on the face.

I had gone to the lunch party alone, leaving a marriage and determined to begin anew, and I was late.

“What on earth are you doing, and who are you, I don’t even know you,” I managed to shriek softly. The party, after all was out of sight but not out of hearing, just beyond the kitchen door. Who was this cheeky guy anyway? This very good-looking cheeky guy.

What does one do (long before #Metoo) when a total stranger sidles up to one and compliments one on one’s…er…dress?

Run for the guest bathroom, that’s what — and thank heaven I knew the house and could take refuge away from the guests and away from the kinds of hands that we used to refer to as Russian hands (or Roman fingers). As I learned later, the fingers were indeed Roman…

But this attention to my rear wasn’t the worst of the day.

Escaping a third encounter, I made it to the lunch table with my spring asparagus marinated in olive oil, lemon, mint, and chopped anchovies and took my appointed seat.

Oh, no, across from guess who?

All I could think of was, “Now I have to watch my tootsies,” and folded them way under my chair, hoping they were less available.

In total innocence, this guy, whoever he was, began eating, and tasting the asparagus, looked right at me and said, “A bit underdone, no?”

Did I hear correctly? My asparagus, famous among my friends and perfectly crisp in the manner of minceur cuisine, the fad of the moment, underdone?

Them’s fightin’ words, and the asparagus was the least of what ticked me off.  Who was this opinionated guest and what did he know about cooking anyway?

I had been in the kitchen since I was five years old, making bread, whipping egg whites for souffles, perfecting the art of poaching asparagus, hell, even growing the organic asparagus in my vegetable garden and this cracker comes to a party and complains about the texture?

As it turned out, he had just arrived from Rome, where he had lived for a decade and where vegetables are often not exactly cremated but shall we say, cooked a bit over the finish line, especially the ones in the famous Asparagi Bismarck made with eggs and parmesan.

This guy, whoever he was, began eating, and tasting the asparagus, looked right at me and said, “A bit underdone, no?”

But we were not at that point. I hadn’t yet had this fateful meeting, I hadn’t chosen to change my direction forever, I hadn’t moved to Rome and spent the most joyful days of my life in the company of a man who had criticized the first course at a large luncheon party of close friends, and I certainly had never, never had an unknown stranger’s hand on my derriere five minutes after having arrived at a party.

It was, to say the least, a turning point, a destiny arranged by Fate.

Thank heaven for the beautiful man whose criticism of crisp asparagus was the least of his intentions, thank heaven for perseverance (to contact me, he asked for volunteers, ostensibly to “help paint his new house”) and thank heaven for every Valentine’s Day thereafter, when we celebrate the magical and strange moment we met and the wondrous years we have spent laughing over the debate of just exactly how long the spears should simmer.