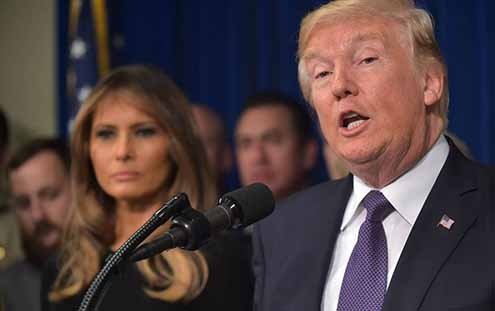 When opinions of a president mar a relationship, what to do?
H

ere’s my question: I’ve been dating my boyfriend for four years. We met in college and had a friendship before we became a couple. We always liked talking about movies, books and politics, though we mostly stayed away from the latter. We always thought we had a lot in common, especially when it comes to core values. Neither one of us is especially religious. Now, though, something’s come between us. My boyfriend has recently come around to the idea that President Donald Trump is good for the country because he’s true to himself. I think he’s a self-indulgent disgrace, and I thought so before the 2016 election.

For a while, we treated this lightly on the subject, but that’s getting harder and harder to do. Whenever we fight, this additional division just adds fuel to our private fire. I’m not sure what to do: shut up about politics and make the issue off limits or continue to defend my position at the risk of provoking even more conflict. I never dreamed this kind of thing could be a deal-breaker and I don’t want it to be, but I’m getting nervous about how to behave and what to do next, since he’s just getting more adamant in his views. Any thoughts?

A: I won’t get into the specifics of the Trump debate. That’s a personal matter. I will say that this particular president has a very dividing effect on people precisely because he’s hostile most of the time. Don’t let his hostility rub off on you.

Many couples have political differences. Some even enjoy the sparring. It keeps minds alert and can even spice up sex. But there has to be an understanding between the two people that presidents come and go, while a relationship, at least ideally, should outlast political parties and their more or less sordid leaders. Marriages can last 10 presidencies, or should.

More important is whether you actually so agree on core values, which you say you do. If he likes Trump but can hear you out, great: that’s fair enough. If he likes Trump but drowns you out, or insults you, there’s a big problem, because that’s unacceptable and because it also suggests deeper issues. Two words come to mind: rationalism and humor. If you can argue rationally and even laugh together, if not at each other, there’s no reason to think your differences of opinion will harm your relationship. But if the laughter fades and partners start turning into enemies or sworn opponent because they have different views, something’s not right, and that something goes beyond Mr. Trump and his Tweets.

Two people who genuinely care for each other know when to stop advocating a cause their partner doesn’t agree with. They agree to disagree on that subject and go watch a movie. Or they debate it until the topic grates on them, and they change the subject to something else (or watch a movie). There’s no crisis if he can (sometimes) make you seethe, and vice versa, so long as there’s no love lost. Inside, you both know you have far more in common than your takes on current events.

I wouldn’t run from the subject. That just buries it. You suggest he’s a smart guy. Great. Let him express his views and counter them with yours. If after telling you how wrong you are, he can laugh at himself, and you can laugh at yourselves, all’s well. Lovers and friends are not meant to agree on everything. It’s if laughter won’t come and his adamant positions lead to resentment that you both might need to take a time out from each other, brief or permanent, depending on how things play out.