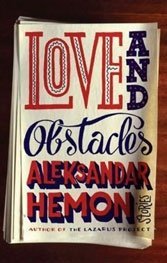 Hemon’s eight autobiographical stories never lose sight of alienation’s core. The narrator of the first story, “Stairway to Heaven,” a teenage boy in Kinshasha with his Serbian diplomat father, is the same one who lunches with his abrasive family and an American Pulitzer Prize-winning author in the final one, “The Noble Truths of Suffering,” in a dining room filled with “faded photos of African landscapes.”

Hemon’s pilgrim’s progress moves from Sarajevo, to Canada, to Chicago, back (briefly) to Sarajevo. With cruel aplomb, he again proves that whoever performed his English-language transplant — he began writing in English in his 20s — deserves not a Pulitzer but a Nobel. Like Conrad, who quit Poland in favor of England and tramp steamers, Hemon left Sarajevo for Ontario and Chicago, after which his Dodge came tumbling down. Being absent for the worst of it may have sharpened both his self-deprecating Balkan cynicism and his disdain for the vulgarity he found at the end of the rainbow. His story-teller is “a congenitally embarrassed American.”

The best work abrades old country and new. “The Conductor” reminisces about the scruffy Bosnian poet Muhamed D., or “Dedo,” with narrator following poet through the war, to Iowa City, and finally to Madison, Wisconsin. “We were euphoric with the imminence of disaster…” — that was Sarajevo. But exile makes for a different disaster, euphoria cashed out. Dedo eventually succumbs to drink and raging estrangement, but not before Hemon renders him up body and soul (“…eyebrows that looked like hirsute little comets.”)

The brief “Good Living” has a Chicago magazine subscription salesman rue the “indelible lousiness” of his job while offering little hope for his Promised Land clients: “All they wanted was to live, wisely use what little love they had accrued, and endure life with the anesthetic help of television and magazines.”

In “Szamura’s Room,” a Bosnian exile named Bogdan accepts the “hospitality” of a crazy Chicago loan shark because he has no place else to go. Next door lives an elderly Ukrainian woman whose apartment exudes familiar Ukrainian odors. “The smell traveled quickly through Bogdan’s synapses until it reached the room where his grandmother had died…” Few contemporary writers convey and compress so well.

One of Hemon’s novels is called “Nowhere Man.” This could well be “Nowhere Man II,” residence of accented Augie March; a man who affectionately hates his father’s “Tarzan English” and whose mother hates America, “their provincialism, their stupid rootless culture of cheeseburgers and cheap entertainment.” Hemon’s art uses disdain and self-deprecation to unblur the world. The resulting portraiture is world class.