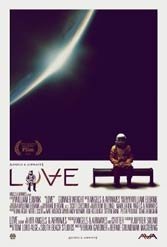 Writer-director William Eubank’s choppy sci-fi story opens on a promising note. A young soldier attached to a doomed Union battalion is dispatched by bearded commanding officer Capt. Lee Briggs (Bradley Horne) to scout and report on what’s mysteriously called an “object of the grandest design.” He escapes to do just that, or so he thinks, just as his besieged comrades are blown to bits.

But the escape is a ruse. Instead, we’re suddenly introduced to mid-21st century astronaut Lee James Miller (Gunner Wright), a lone International Space Station occupant who will soon lose contact with earth, probably because of a global war. The Civil War intro is part and parcel of a hallucinatory porridge intended to make clear man’s relentless propensity for cruelty and to ensure that the abandoned Miller is fully wedded to his lost-ness.

Around and around he goes, aging, talking to himself, making up a romantic partner; the years bringing a beard, intimations of madness, and, bizarrely, tattoos (how?). Eubank intersperses Miller’s solitude with video-clips of ordinary earthlings reflecting on the importance of community and simple companionship.

When Miller takes to reading a Civil War diary as a pastime, the opening scenes and lines — “Why do we struggle for the more righteous breath when we all end up in the same place?” — are given context. But by then Eubank has painted both Miller and script into a droning corner: Isolation is isolation, with the possibilities of transcendent exit in the mind’s eye alone. The dead-end generates any number of second-rate riffs on Kubrick’s Space Odyssey, including light shows and time travel, but little more. The terminus brings a nearly imploring voice that tells the audience “you are not alone and you felt something, and it was love.” What a maudlin requiem. It felt more like disappointment.