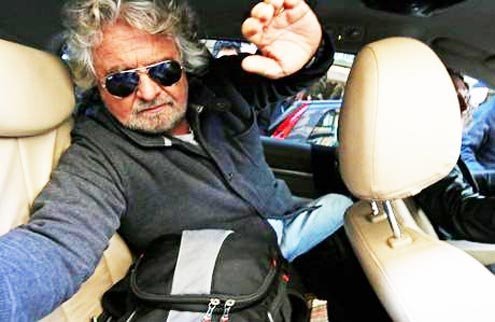 In truth, Italy has been lost for a long time now ... There's not much left to save.
I

t is easy and maybe apt to blame Italy’s dilapidated political culture for the rage shown so far by those who claim their mandate includes wrecking the system they were elected to represent. But such aptness shouldn’t allow the would-be repairmen to embark on a gratuitously vindictive victory lap that makes even roundly criticized incumbents look appetizing.

That is just what is happening in Italy.

That hope has evaporated. Grillo insists the parliamentary house must come down, even if he’s now earned the right to sit in it. Those responsible for decades of decay must wither and die on the national stage, after which his movement will dispose of the carcasses and consider picking up the pieces. Imagine a triumphant Tea Party putting off government participation until burning down the Obama White House.

Unfortunately for Italy, Grillo’s tone — albeit theatrical — has much in common with the country’s more notorious 20th-century populists, including Benito Mussolini and Silvio Berlusconi. Both Mussolini and Berlusconi practiced self-aggrandizing character assassination and psychological martial arts but neither possessed the Internet’s anarchic consensus-building mechanisms. They had to bargain their way to the top, at least for a time.

Grillo’s deviousness fits in with his status as a performer and lapsed capitalist who discovered his heckler’s calling in midlife, selling off his Ferrari, embracing the web, and morphing into a born-again online prophet. Dissenters rarely change their stripes, all the more so when they’ve made a career based on standup routines and, more recently, on virtual persuasion.

Grillo’s smoldering straddles educational, vocational and ideological barriers, no easy task in Italy. If his movement disdains the system — its membership portrayed as a tribe of entitled lackeys — it hates the Italian media, since most news outlets receive state subsidies that Grillo’s brave new democrats view as an automatic sellout.

His defenders insist “mad as hell” tactics beat sitting down with the country’s old boy establishment, which the Communist Party did after winning 34 percent of the vote in 1976. The so-called “historic compromise” between Communists and ruling Christian Democrats marked the beginning of the Italian left’s dismembering; an ugly historical sequence Grillo’s generation doesn’t want to repeat.

His beer hall baying — “Send them all home: Close the parties, take away their money, immediately…” — descends from the hammer-wielding rhetoric of the Communist daily Lotta Continua (“Endless Struggle”) whose 1960s editorial writers, channeling doses of Marx and Robespierre, helped shape Grillo’s message. Anything but a purge was a sell-out.

Bellicose rhetoric made sense when Italy’s rich-poor divide was deeper and the Vatican-state relationship stronger, but makes less sense now, in a center-left leaning political environment more hospitable to the introduction of direct elections, conflict of interest reform, and media subsidy cutbacks. Rarely has a newborn political movement been in a better position to force stubborn parties substantively redesign themselves.

But redesign isn’t in Grillo’s playbook (or in that of his éminence grise partner, blog-building businessman Roberto Casaleggio). He seeks a humbling payback that puts parties on their haunches, hoping further fireworks deepens resentment and eventually give his movement a chance to govern outright — pollsters now put Grillo’s movement at 29 percent, a three point gain since the election. Stripped of face-saving devices – bella figura — discomfited mainstream politicians are scheming ways to limit the damage when Italy next goes to the polls, probably in the next few months.

Grillo’s prospective center-left allies (though he acknowledges none) are cornered and scornful. The feel-good egalitarianism of “citizen state” approach has been tempered by concerns about the movement’s cult-like dimension. “The goal,” Grillo told Time Magazine, “is to extinguish ourselves,” not a political strategy, he explained, “but a view of the world. It’s not substituting one political class with another.”

This Robespierre-like reset button — “Louis must die that the country may live!” — is the perfect rationalization for scorched earth transmissions that portray members of the existing order as the unshakable emissaries of a vague financial, corporate and religious cabal that over decades has worked to possess and ruin Italy (“There’s not much left to save,” says Grillo). It’s a neat notion shared by many, if only long-term conspiracies weren’t so rare — except online, where even rogue gossip, if constantly replenished, exudes “transparent” credibility.

Grillo says he exists in the likeness of an online nation peddled as a precursor to wired governance. If only web networking wasn’t the most sincere but also capricious form of personal communication so far let loose to rove the unregulated planet. In Italy, it’s a place where the talk radio rancor once limited to soccer debate can find a second adolescence in politics.

“Liberty,” wrote “reformer” Robespierre before the guillotine, “consists in the freedom to do everything which injures no one else.” — if only Grillo weren’t beginning to hurt.