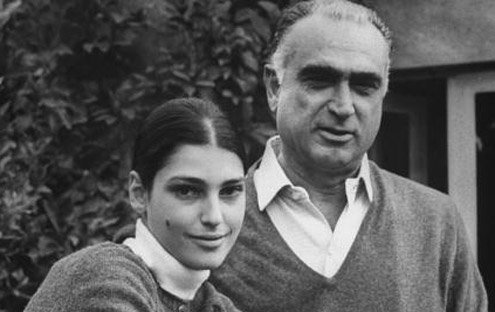 Author Luigi Barzini Jr. with his model and actress daughter Benedetta in garden of their country home in 1965.
I

n recent weeks Italy has twice come under passing scrutiny in The New York Times. The first touch was a column by Frank Bruni, once that newspaper’s Italy correspondent, was a gentle but melancholy return-trip ditty about Italy’s inability to repair its woes, made credible in traditional style by supporting comments from politicians and social scientists. It ran under the eye-catching headline “Italy Breaks Your Heart.”

A few days later, peripatetic author and Corriere della Sera columnist Beppe Severningni, once The Economist‘s correspondent in Italy, chimed in with a piece about pythons, though his reptiles were aging postwar politicians, bureaucrats and businessmen who refuse to give up the larded perks of the Italian workplace, leaving millions of their progeny out of work, now a record four out of 10 (though the number was also high in the best of times). The title editors chose for his piece was even more dramatic: “The Nation That Crushes its Young.”

Both their dirges were fair enough, and even eloquent, if only their recycled insight didn’t bypass centuries of Italian sensibility, including its stubborn unwilling to give up the comforts of the known — a tendency that, digital agitation aside, maintains a proud moat against what’s generally known as progress. If anything, Italy knowingly breaks its own heart.

Only one Italian ever bemoaned his country in definitive way, one from which there was no return. He was Luigi Barzini, Jr., the journalist son of one of the country’s most esteemed foreign correspondents. The final page of his 1964 “The Italians,” which he wrote in English, is so rigorous, and savagely prescient, that it makes the observations of Bruni, Servernigni and many, many others into lesser concerns. Barzini’s book was pilloried (by Italians) and embraced (by foreigners), but neither side challenged the fierce sweep of his intellect.

I interviewed him once, in 1977, and met a dour but pleasant man who spoke to me humorlessly, as if burdened by his own intelligence. Toward the end of his life, he divided his time between a farm and an apartment Rome, where he died of cancer in 1984.

What follows is the closing paragraph of “The Italians,” published 50 years ago next spring. It is ferociously apt in the sort of nonpartisan way that has regrettably fallen from the fashion. Anyone interested in writing seriously about Italy should read it and consider it, if possible reading the entire book as well. If not, here are 339 damning but wise words:

“The Italian way of life cannot be considered a success except by temporary visitors. It solves no problems. It makes them worse. It would be a success of sorts if it at least made Italians happy. It does not. Its effects are costly, flimsy and short-range. The people enjoy its temporary advantages, to be sure, without which they could not endure life, but are constantly tormented by discontent. They rage against their fate today as they have always done. They have been on the verge of revolution for the last one hundred and sixty odd years, against kings, foreign domination, the Church, disunity, landowners, capitalists, centralization in turn. All these, of course, at one time or another contributed something to the national ills. Politicians eternally tinker with laws and institutions. But the fundamental cause escapes everyone. It is the Italian way of life which makes all laws and institutions function defectively. It is the illusion of a solution, lotus-eating, the resigned acceptance of the very evils man has tried to defeat, the art of decorating, ennobling them, calling them by different names, and living with them. The unresolved problems pile up and inevitably produce catastrophes at regular intervals. The Italians always see the next one approaching with a clear eye, but, like sleepers in a nightmare, cannot do anything to ward it off. They can only play their amusing games, try to secure their families against the coming storm, and delude themselves for a time. They console themselves with the thought that, when the smoke clears, Italy can rise again like a phoenix from the ashes. Has she not always done so? The tenacity and eagerness with which the individual pursues his private interests and defends himself from society, his mistrust of noble ideas and motives, the splendid shows, the all-pervading indulgence for man’s foibles makes Italian life pleasant and bearable in spite of poverty, tyranny and injustice. They also waste the effort and sacrifice of the best Italians and make poverty, tyranny and injustice very difficult to defeat.”