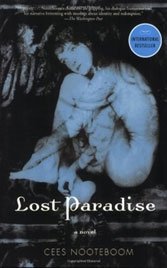 By Cees Nooteboom, translated from the Dutch by Susan Massotty

An author flying to Berlin on small aircraft sees a pretty woman unwrapping a book. He soon sees that it’s his book — “this book” — though whether is exists depends on your penchant for daydreams. Smitten, he distracts himself in an airline magazine that has a feature about Aborigines and another about the favelas outside Sao Paolo. Which makes him think of the introduction he’s writing to a picture book about cemetery angels. “At this altitude,” he says, drifting, “the world has only blank pages.”

Coloring book-style, he fills them. With Alma and Almut, two young German-Brazilian best friends who revere religious art and angel myths but want most to visit Australia to quench a fascination for Aboriginal Dreamtime. They do, and later dress up as angels for pocket change. This introduces Erik Zontag, a disenchanted literary critic who reluctantly visits a German mountain spa only to find Alma, now a masseuse, whom he first met in Perth in the guise of… an angel.

“Whoever the author of that book is,” says the narrator, “he has take considerable risks.” And Nooteboom has. He grafts airborne shavings to make up a story that pays homage to Milton’s “Paradise Lost” while generously sympathizes with the loss an author endures when his fiction ends. Though he breathes life into characters who after a love affair are capable of saying “I have never existed so much,” he must still part with them, which also means cutting loose cravings he adores, even lusts after. He loves the woman on the plane just as he loves Alma, her fictional shape. But as Alma tells Erik Zontag, and Noteboom, “Angels can’t be with people.” All the author can do is write them down and let them go.